The announcement was made only two hours before kick-off. The match was due to played at 18:00 BST.

"Discussions are ongoing between the relevant stakeholders in regards to the implications of the decision not to play tonight’s game and a further update will be provided in due course," said the EFL in a statement.

EFL Statement: Tonight's Carabao Cup game with @SpursOfficial will not go ahead as scheduled.

"Leyton Orient, the EFL and the relevant authorities are conducting a thorough review of the club’s COVID-19 secure procedures with the view to reopening the stadium and training ground as soon as possible." 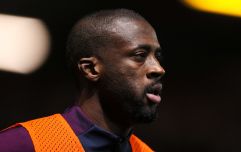 END_OF_DOCUMENT_TOKEN_TO_BE_REPLACED

Several Leyton Orient players had tested positive for the virus following their 2-2 draw with Mansfield Field town, and the club had been in discussion with Public Health England about next steps.

"Leyton Orient's priority is the health and wellbeing of its players and staff. Those who have tested positive will now strictly follow government self-isolation guidelines," said the club, as reported by the BBC. "The Breyer Group Stadium and training ground facilities will be closed until further notice."

"We have also informed Mansfield Town, Plymouth Argyle and Oldham Athletic, our three most recent opponents, prior to the public release of this information'" Leyton Orient confirmed in a statement on Monday.

Orient were due to host the Premier League side at Brisbane Road.