END_OF_DOCUMENT_TOKEN_TO_BE_REPLACED

His latest role though is as Ted Lasso, in the new Apple TV+ show of the same. You might remember Ted as the clueless American football coach who ends up becoming Tottenham Hotspur manager in an NBC commercial back in 2013.

Ahead of the show, we got to speak with Sudeikis, and we thought we should give him a little warm-up in peculiarities of British football culture. In particular, the weirdest football mascots.

Check out what Jason thought of Gunnersaurus, Kingsley, Fred The Red and Boiler Man below.

We showed US comedy star Jason Sudeikis some of the weirdest British football mascots, including @Gunnersaurus and @ThistleMascot, and got him to rank them. pic.twitter.com/qnnHRRRxjU 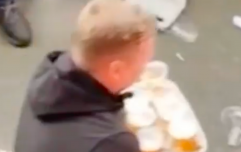 Guy seen carrying 48 beers in one go at football match

END_OF_DOCUMENT_TOKEN_TO_BE_REPLACED

The original commercials were made to advertise NBC Sports' coverage of the Premier League in America. The first instalment from 2013 saw him appointed as head of Tottenham Hotspur, and then quickly relieved of his duties. It was followed a year later with a second short, with Ted now a commentator on NBC.

Jason Sudeikis made his name on Saturday Night Live, where he was hired as a writer in 2003, and served as a cast member from 2005 to 2013. He then went on to become a comedy A-lister, starring in films like Hall Pass and Horrible Bosses, as well as lending his voice talents to animations including Epic and The Angry Birds Movie.

TED LASSO will be on Apple TV+ from 14th August with new episodes debuting weekly on Fridays on the streaming service.

popular
Woman starts driving over Insulate Britain protestor in furious standoff
News host was having absolutely none of Nigel Farage's claims on Monday night
Guy seen carrying 48 beers in one go at football match
Kick It Out want urgent talks with Newcastle over fans' mock headdresses
Downing Street issues winter warning as daily Covid cases near 50,000
Kanye West has legally changed his name
Insulate Britain demand motorway speed limit reduction to 10 MPH
You may also like
Entertainment
Brendan Fraser joins Martin Scorsese's Killers of the Flower Moon
News
Prince Harry says Diana was 'chased to her death' for 'being with someone not white'
News
Harry says Meghan told him how she would kill herself before public appearance
News
Lady Gaga says record producer raped her at 19 and ‘dropped her off pregnant on street corner’
Entertainment
Prince Harry's new TV show with Oprah coming later this month
Next Page