Dele Alli has taken his challenge to the next level

Yes Dele Alli is a God amongst mere mortals, capable of pushing his body to inhuman feats. And that's before he gets on the football pitch.

And just when the general public were there, cracking the code of the Dele Alli Challenge, after he pressed his right hand to his forehead, peering through a hole made by his index finger and thumb after scoring in Spurs' 2-1 victory over Newcastle.

At that moment, he escalated things.

Posting on his Instagram story to rinse teammate Georges-Kevin N'Koudou's inability to replicate it, the Spurs attacker introduced us to the Dele Alli challenge 2.0. 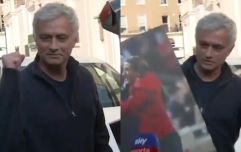 END_OF_DOCUMENT_TOKEN_TO_BE_REPLACED

Previously it was possible to replicate the celebration by:

1 - Make the 'OK' symbol by joining the tips of your index finger and thumb to make a circle and point your other three fingers up.

2 - Move 'OK' symbol to up to the other side of the three fingers so that it sits above them.

3 - Press the back of your three extended fingers against your forehead and look through the hole.

Just let us know when you've sussed out how to produce this piece of finger wizardry.