A report from the Daily Mail suggests that Birmingham City are set to fire the steward involved in an altercation with Aston Villa player Jack Grealish during Sunday's derby.

After Grealish scored the only goal of the game, he celebrated with the away supporters. Video of the celebration appeared to show a steward shoving the midfielder as stadium security tried to keep things under control and get the Villa players back onto the pitch.

The steward in question then appeared to be taken away by police.

Reports in the Mail now say the Steward is set to be "under serious threat of losing his job".


During the first half of the heated derby game, 27-year-old Paul Mitchell ran onto the field of play and struck Jack Grealish from behind. 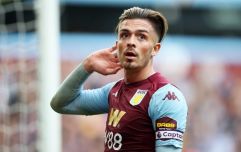 END_OF_DOCUMENT_TOKEN_TO_BE_REPLACED

He pleaded guilty to assault at Birmingham Magistrates Court, and was sentenced to 14 weeks in prison.

Magistrate Alison Fisher passed the sentence on the unemployed Mitchell, whose last job was managing an unnamed pub. Upon re-emerging for sentencing, Mitchell, in handcuffs, blew a kiss to his family and appeared to shrug his shoulders as he was led up to the dock alongside a prison officer to hear his punishment.

Fisher told the defendant it was an "unprovoked assault on a footballer who was simply doing his job" and that it was witnessed by "many families, children and young people". Therefore, she concluded, the verdict should act as both a "punishment and deterrent".

She then sentenced Mitchell to 14 weeks in prison as well as a 10-year banning order from football.

In his post-match interview, Grealish described the game as the 'best day of his life'.

Speaking to Sky Sports, Grealish said: "[It's the] best day of my life. To come here for the first time, captain Aston Villa and score the winner, it's what dreams are made of. Especially for me being an Aston Villa fan.

"I was just unaware at the time. I think we had a corner was it? Or a throw-in in the corner, and I was walking into position and felt a whack around the side of my face," Grealish said on the attack he suffered during the first half.

"Obviously there's rivalry in football and that but I don't think there's any place for that really. I just tried to get on with my job in the end and I think I did you know, I scored the winner and we've come away with three points."


popular
The JOE Friday Pub Quiz: Week 179
Jenson Button on crashes, his Brawn fairytale and the rules of the road
The FootballJOE Quiz: Week 1
This is the hardest Pokémon quiz you'll ever take
Five Fantasy Premier League Tips for Gameweek 28
KNEECAP answer the most annoying questions Irish people get asked
QUIZ: Name the capital cities of these 30 countries