There's a simple way to get a free beer today

If you’re interested in doing a spot of drinking tonight, then the good news is you might be able to get your first one free.

END_OF_DOCUMENT_TOKEN_TO_BE_REPLACED

Independent craft brewer, BrewDog, is inviting people across the UK to 'break from the shackles of mass-produced beer' with a free taste of its new session brew.

All you have to do is invite a friend to join you for a tipple by tagging them on BrewDog’s social media channels using the hashtag #DrinkIndie before midnight tonight (Thursday 11th January 2018) and you’ll both get a free half-pint of Indie Pale Ale at any of BrewDog’s 30 UK bars.

To get the freebie you just need to show a member of the bar staff your phone. 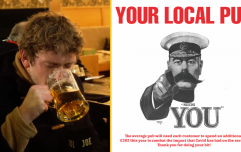 END_OF_DOCUMENT_TOKEN_TO_BE_REPLACED

James Watt, cofounder of BrewDog commented: “Indie Pale Ale will mark the craft beer awakening of thousands of people who are yet to discover the awesome power of independent craft beer. This is for everyone who thinks they don’t like beer, for those who’ve been bamboozled by mega breweries insisting beer is just fizzy, yellow lager, for those too shy to ask for something different. This is the first beer of the rest of your life. Toast your freedom, and be transformed.

“Indie Pale Ale is perfect for anyone who is ready to expand their craft beer horizons. Designed for the post-lager generation, it is the gateway to the kickass world of independent craft beer. This labour of love has been months in the making, but it was worth the wait.”

Well, I know what I’m doing after work.