There are several combinations of food that shouldn't mix well but do. For example, bacon and maple syrup. The first time someone suggested that to me I scoffed at the idea. Now? I'm requesting extra pots of syrup until the bacon is drenched in it. Pears and blue cheese. In the world of drinks, milk and Malibu is a tasty combo, surprisingly. Milk and coca cola though? Surely not. 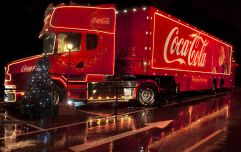 The Coca-Cola Christmas truck tour is cancelled this year

END_OF_DOCUMENT_TOKEN_TO_BE_REPLACED

I ask that because James Felton, BAFTA winning TV and Radio comedy writer, has claimed that it's a thing people drink in Birmingham.

"Milk coke is a real thing. Brummies love it. We can all move on from this discussion now, I will be taking no further questions," Felton said on Twitter.

Milk coke is a real thing. Brummies love it. We can all move on from this discussion now, I will be taking no further questions. pic.twitter.com/dQR8bg3UAO

Now, it's not like people on Twitter to get worked up over nothing, but they were incensed by this monstrosity.

Responses included people claiming they were informing the police, preparing to stage an intervention and even that this was the single worst ever tweet, which is fucking saying something.

contacting your loved ones to stage an intervention

WHAT THE FUCK is technically not a question

He's almost certainly trolling, in which case, he's caught a handful of fish, but still, stooping to such levels that you would advocate such a monstrous drink deserves the criticism it got.

popular
St James' Park to get new name under Newcastle new owners
How did Brian Laundrie’s parents find his remains in a few hours?
The JOE Friday Pub Quiz: Week 266
Taliban 'behead junior volleyball player and post photos of her head on social media', report says
Real life Squid Game coming to UK and you have to sign a 'medical disclosure' to play
Alec Baldwin asked 'why was I handed a loaded gun?' after fatal on-set shooting
Cold War Steve: How the Banksy of Twitter turned Covid angst into art
You may also like
News
UK faces Diet Coke shortage due to Brexit
Sport
Xhaka necks a bottle of Coke before penalty shootout victory against France
Football
Heineken will no longer appear in front of Muslim players after Pogba causes rule change
Football
Yarmolenko asks Coke and Heineken for sponsorship at press conference
Football
Southgate explains why he didn't move Coke bottles like Ronaldo
Next Page