INVESTIGATION: We tried sweetcorn ice cream, so you don't have to

I've got the scoop.

There comes a time in every young journalist's life when they have a career-defining moment. For some, it's interviewing their heroes, for others, it's getting a big scoop. Literally.

I was sent an anonymous tip that sweetcorn ice cream was in production near the office. Not usually one to haphazardly skive off work for half an hour, I hesitantly decided to check it out.

This is my story.

I gathered my money and also credit card in case I hadn't enough change and set off on a journey to find sweetcorn ice cream but also myself. I was nervous, my knees were weak, my arms were heavy. Mom's spaghetti.

When I arrived at the ice cream shop (parlour?), I was shaking with anticipation and also inner city fumes. A heavy smog had settled over the city and also my mind.

I was greeted by two very nice and smiley girls. They were unaware of the journey upon which I was about to embark. I was Ernest Shackleton and they were the providers of my less-than-adequate exploration equipment. END_OF_DOCUMENT_TOKEN_TO_BE_REPLACED

There was a bountiful selection of ice creams available, which made it even stranger that they'd decide to make a sweetcorn flavour. I really wanted a scoop of hazelnut. I would've given my left tit for a mouthful of hazelnut ice cream just to settle my nerves before inflicting such senseless torture upon myself. The girls probably would've given me a taste if I'd asked, but I resisted. I want my art to be authentic.

I ordered a scoop of sweetcorn and felt the hairs on the back of my neck stand up in unison. This isn't God's way. Jesus didn't die so we could put sweetcorn on a pizza, nor in our fucking ice cream.

I wept quietly to myself as the girl scooped the pale yellow mush from the tub. My eyes were raw with emotion and trepidation as to what life would be like ASIC (After Sweetcorn Ice Cream). She handed me the tub. I gave her my hard-earned money. I can't be sure, but I'm almost certain I heard the pair chuckle as I left. 'What an idiot, LOL', they probably muttered.

I began walking quite swiftly away from the establishment. I somehow got it into my head that I needed to get far away as quickly as possible, like when you shit in the work bathroom and need to leave the scene before anyone realises it was you who performed such an atrocious bodily function. 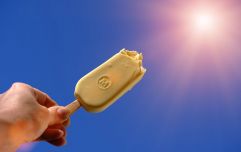 59% of Brits do not consider a Magnum to be an ice lolly, extremely controversial YouGov survey finds

END_OF_DOCUMENT_TOKEN_TO_BE_REPLACED

The ice cream felt heavy in my hand. It was the weight of my anticipation, fears, trepidation and approaching career-defining moment. I stared into the sweetcorny abyss, and it had the gall to stare right back at me. Twas as if it knew I was there for something much deeper than an experience.

I tried to focus on the positives. I was out of the office for a while, they had given me a green spoon, it wasn't raining. I ran out of positives very quickly and focused on mentally preparing myself for what lay ahead. Would I vomit? Would I choke? Would I require medical assistance after being exposed to such a rogue flavour of ice cream? Would I *gasps* actually enjoy it?

After heading to the nearest public space (a park), I steadied myself and found the perfect spot to try the 'maïs sucré' creation/abomination. It was near the entrance, so that an ambulance and several medical professionals could reach me with relative ease because I am a deeply considerate person, even when potentially dying.

I took one final look at the ice cream before I put it inside my body. I was looking, but was I really seeing? Yes, sadly yes. I was seeing the fucking corn kernels poking out of the milky dairy substance. They were staring at me. I swear they arranged themselves to spell out 'WHAT THE FUCK ARE YOU DOING?', so I took a photograph for proof. As you can see below, I was very clearly hallucinating at the time.

Then, I tried it. I put a spoon of sweetcorn flavoured ice cream into my body. What happened next will shock you. I put a second spoonful inside my body. But no more.

Folks, it was fucking disgusting, excuse the profanity. It's absolutely fine up until the point where you get a taste of actual corn and then subsequently feel the corn skin floating around you mouth.

Lest we forget, corn, as a flavour, isn't nice. I've never been on a night out and had a craving for sweetcorn circa 3am. Nobody has. Sweetcorn needs to be among a plethora of other ingredients to be considered somewhat passable - that is the law.

The only saving grace of sweetcorn ice cream is the fact that it is, at its very core, ice cream. At first, there's a nice refreshingly cold substance in your mouth, but then you're hit with utter outrage at what it's inducting to your tastebuds. Fucking sweetcorn.

I tried to mush around the ice cream a bit to make fully sure what I was tasting was absolutely an accurate representation of sweetcorn ice cream. Perhaps I had simply gotten a bad part of the ice cream during my maiden tasting experience. I made a quirky and inventive sad face in the ice cream which had begun to melt (just like my hopes for the world being anything other than a disastrous place).

After gathering myself for a moment, I decided to go in for a third taste. I know what you're thinking, this girl is a mad man, and you'd be right. I am 100% a mad man. But I did it. I consumed a third spoonful of sweetcorn ice cream and it was, as expected, fucking repulsive.

Moments later, I found myself hyper-aware of my mouth contents. Although the ice cream had been thoroughly swallowed, there were remnants of the past. Remnants of the distress that I was still living. I brought one of the substances to the front of my tongue and carefully removed it.

Warning: Some readers may find the following image distressing

That, my friends, is a piece of sweetcorn skin. One of many I encountered during the minutes, hours and even days after subjecting myself to the fruits of satan's asshole: sweetcorn ice cream.

I literally had to spit several pieces of sweetcorn skin from my mouth like some kind of animal all over the park. I can never go back there because there's a 100% chance I'll be met with be grainy posters looking for my identity. 'Spitting girl', they'll refer to me as.

Shortly afterwards, I left the park. But not before holding my offending carton of creamy iced evil up to a parked bus nearby. I wanted those innocent bystanders to act as witnesses and acknowledge the terror that had been inflicted upon me (by me). I wasn't in a normal state of mind, so forgive this aggressive act.

One lady looked out the window and was visibly shaken. I can't say I blame her. Melting sweetcorn ice cream is a very real and dangerous threat to modern society and we need to abolish it from our lives as quickly and safely as possible.

It was time to take action. I knew exactly what I had to do. I marched myself right back into the park, to that chilling scene where it all took place. Mostly it was about pride at this point. Those people in the park were laughing at me. I urgently needed to take back control of a situation which had gotten very much out of control.

popular
'Loch Ness Monster' caught on drone footage by wild camper
The JOE Friday Pub Quiz: Week 262
Foreign workers to be let into UK to help solve petrol crisis
Man blocks pavement with fence to stop chippy customers staring into living room
Why United vs Villa and Chelsea vs City are happening at the same time
Man accused of having sex with horse escapes from jail
Billie Eilish says she lost 100,000 followers 'because of the boobs'
You may also like
News
Israeli PM vows to take 'aggressive' action over Ben & Jerry's ban
Life
Ice cream man in Bolton loses licence after having meltdown at group of kids
Life
Meet the Lionel Messi of ice cream men
Food
Kinder Bueno ice creams have finally arrived in the UK
Food
Ben & Jerry's has launched a new anti-Trump flavour
Next Page