They're two absolute monsters among men.

Hafthor Julius Bjornsson is the 400lb strongman who is better know as The Mountain from Game of Thrones.

END_OF_DOCUMENT_TOKEN_TO_BE_REPLACED

Internet star Rich Piana is one of the world's biggest bodybuilders after going on an incredible 30lbs in 30 days bulk to hit 315lbs.

So when the two of them got together to train at Gold's Gym in the US it was going to be spectacular.

The 6ft 9in Icelandic giant Bjornsson is deep in training for World's Strongest Man but he flew out to the US to hit the gym with Piana, who boasts some of the biggest arms in the game. Thor dwarfed the American bodybuilder.

The two-time Europe's Strongest Man is known for his ridiculous strength - he regularly pulls trucks in training and has a deadlift of around 450kg.

END_OF_DOCUMENT_TOKEN_TO_BE_REPLACED

He trains hard and he trains heavy to compete to be crowned the World's Strongest Man - not to mention his 10,000 calorie daily diet.

Interestingly, Piana no longer trains heavy at all because of years of punishment on his joints. Instead he trains low weight and high reps for more sets to make his muscles grow, although during his bulking phase he was reportedly putting away nine meals a day.

But the American told the Scandanavian strongman he was using too much weight, saying that if you can feel it more in the abs than in the triceps then you've gone too heavy.

Next was overhead tricep extensions, just in case Piana's arms weren't quite big enough, with them hitting 15 reps. for four sets. They pulled some incredible rep faces though. 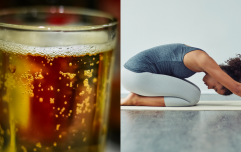 END_OF_DOCUMENT_TOKEN_TO_BE_REPLACED

Then they moved onto the free weights to attack their arms with some bicep hammer curls.

Piana went for the alternating arm curls while Thor did the double arm variant, getting a nice contraction at the top, before burning out with some alternate reps on the 65lb dumbbells.

Thor admitted he didn't actually have to do much specific arm training for strongman - just holding heavy weights on events like the farmer's walk was enough to give him strong forearms and a vice-like death grip.

Finally they finished off with a blast on the preacher curls to isolate the biceps. In between sets Piana says that he's dieting on no carbs.

"I'm on zero carbs," he says. "My body works good on that though. It's not hard, I don't suffer. I have energy, I feel good. It's just my muscles get flat and weaker.But I lose body fat really quickly."

When asked if power athlete Thor had ever gone zero carbs he looked bemused and just replied "no".

We imagine he's pretty angry when he's not got carbs in him.