What do Cristiano Ronaldo, Gareth Bale and Roberto Carlos have in common?

Aside from playing for Real Madrid at some point, all were absolutely rapid. They were also no strangers to leg day. Squats are rightfully seen as the best way of building size and strength in the quads, glutes and hamstrings, but they’ve also been shown to boost speed.

END_OF_DOCUMENT_TOKEN_TO_BE_REPLACED

The world of football took too long to accept strength training as an important part of match preparation.

Hitting the gym was seen as a distraction from playing on the field, when this belief is now known to be outdated. Gaining strength also helps you gain speed, and this has been proven by science. 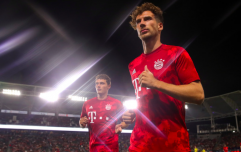 END_OF_DOCUMENT_TOKEN_TO_BE_REPLACED

The University of Salford had a group of young pros complete a mid-season strength programme with sufficient squat time.

Twice a week, the footballers worked up to their one rep max (1RM) in the barbell back squat. This was then followed by 5, 10 and 20 metre sprint tests.

After six weeks, not only had the footballers’ strength increased - but their sprint times had significantly improved too.

Researchers deliberately conducted this study during the season, to prove lifting weights did not hinder recovery or performance on the pitch.

When it comes to leg strength and speed, the proof is well and truly in the pudding. Roberto Carlos was for years recognised as having the biggest quads in football.

While he gained a reputation for leathering free-kicks into the top corner, an under-appreciated attribute of his was an ability to outpace the opposing defence before whipping a cross in.

If you’re a footballer or just want to improve your speed, one thing’s for certain - don't scrimp on squats.