At first glance we thought Liverpool striker Daniel Sturridge was enjoying an ill-advised game of Twister.

We'll admit we were fooled by the colourful board he's standing on. 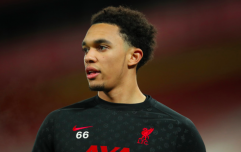 END_OF_DOCUMENT_TOKEN_TO_BE_REPLACED

But actually the injury-plagued England forward was hitting some serious gym rehab work.

We don't even know what the first exercise with the medicine ball is, or even if it has a name, but his hamstrings and core look like they're getting a solid workout.

Sturridge follows it up with some weighted box squats for his legs, single-arm rows while standing on one leg for core strength and some cable chest presses to finish off.

The 25-year-old had a nightmare campaign last season, making just 19 starts as Liverpool struggled for goals and finished in sixth place.

But this 'daily gains' video posted by the star will give heart to Reds fans.