If you've not noticed, the Olympics are on and the athletes are all in incredible shape.

But right at the top of the tree in terms of body composition are the Olympic sprinters (yes we know - the weightlifters and gymnasts are pretty damn hench too).

The likes of 100m king Usain Bolt and Team GB sprinter Harry Aikines-Aryeetey are lean, muscular and shredded all year round.

It's the physique that so many of us are trying to achieve slogging our guts out in the gym - and it's training the bigger fast-twitch muscle fibres for maximal power helps build them into physical specimens.

But if you want to look like an Olympian then you're probably going to have to train and eat like one.

Sarah Claxton is a former Olympic hurdler who now uses her knowledge of training and nutrition to get people in the best shape of their lives at London's Embody Fitness.

The ex-English athlete specialises in the 100m hurdles and competed at the 2004 and 2008 Olympic Games - finishing eighth at the latter Games - and boasts a lifetime best of 12.81 seconds, which remains in the top four British all-time best list.

Like most sprint athletes, her training was based around speed and power - but it brought incredible body composition benefits.

We spoke to her about how sprinters train to make them faster, stronger and more powerful athletes and how this training translates into the gym to people she coaches for body transformations looking for the ultimate lean physique.

How did you train as a sprint athlete?

I did long jump first. Then I switched to hurdles. So I was training six days a week for three or four hours a day.

END_OF_DOCUMENT_TOKEN_TO_BE_REPLACED

We had running sessions first – sprints on a track. Then we would have weights afterwards and then plyometrics after that.

Monday, Wednesday, Friday, then intensity would be quite high. Then Tuesday and Thursday it would be lower because you can't train with such high intensity every single day because you would just breakdown and get injuries and things like that.

So on a Monday we'd get to the track and warm up for an hour. Probably then do some sprint starts to the first hurdle or a long running session – that would be a good hour and a half.

Then after that we would go into the gym and do a weights session as well.

Then it would be a plyometrics session – so standing long jumps, box jumps, hurdle rebounds which is where you have five hurdles spread out and you would bound over them

So explain the running element - what was the goal of the training at and what were the techniques involved?

So the sprinting part it would be to either practice a certain movement over the hurdles – breaking the movement down into different sections. Or just to again practice a block start or a general conditioning session.

During the winter we would do ten 300m runs with two or three minutes rest in between. Or we would have 30-second, 60-second and 90-second runs on the grass.

We would also do 150m sprints where we'd do six of them. So it was pretty intense.

The rests in between mean you can recover and go 100% again. But as the session goes on you get more tired but that's when you have to push more to build up the lactic tolerance.

How does that training build up your lactic tolerance and how did it improve your performance?

END_OF_DOCUMENT_TOKEN_TO_BE_REPLACED

Because our event was speed endurance – even though it's a flat-out sprint there is endurance in there towards the end – because we're doing it over distance we're in a lactic state and we're trying to push your body through that, the body gets used to being in that state.

So when it comes to a race we've already been in that condition already, so during a race it's easier for us to hold on and keep our form better.

What kind of work were you doing in the gym?

We would probably do two gym sessions a week. Any more and we would have been a bit too heavy. We want to stay light but still be powerful and explosive.

During the winter we would do heavier weights and more reps. So we would be doing cleans, squats and deadlifts. Then also doing isolation work on our hamstrings, quads and a lot of core work because of the position you have to hold going over a hurdle you need to be strong in your core.

As it goes on through the season it would be lighter weights but quicker on the movements.

Everything we did was quick, nothing was slow like you would normally do in the gym. We would be targeting different muscle fibres – we would always want to keep the fast twitch fibres conditioned.

Did you find the gym work helped you become a better athlete?

Yes it did, because we would do the gym where everything would be fast and explosive then you would come out and do plyometrics which correlated to what we were doing in the gym. You would feel bouncy and really fast.

What kind of things were you doing with plyometrics and how did that improve your performance? 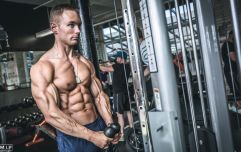 END_OF_DOCUMENT_TOKEN_TO_BE_REPLACED

We would do bunny hops over hurdles – so trying to make the least contact with the floor as possible. So we had to jump but as soon as you touch the floor you had to rebound and jump over the next hurdle, rather than sinking into the floor and going again.

Because when we're sprinting we want our foot contact to be quite quick off the ground, so doing plyometrics where the contact is less on the floor, it really helps our sprinting.

With the movement on the plyometrics it crosses over to sprinting. It gets the hip flexors involved as well.

When you moved from athletics to what you do now, does a lot of it translate over?

I was actually quite surprised by how different it is. With track and field everything is explosive and fast but with personal training you have to slow everything down so people can feel what muscles are moving and they can get the benefits of the weight training.

The timings are obviously different as well – we would get a lot longer recovery because everything is so much more explosive. Whereas when someone is trying to get fit their recovery time is less.

What elements from your athletics career benefit people who are looking to improve their body composition.

It's all mental with a lot of people. They can push themselves to a certain limit, but they don't know how to get past that barrier. Whereas I know how to get them past that and get that extra little bit out of them. So being an athlete really helps with that.

The weights they're using are getting heavier and they're getting stronger so it shows they are improving.

What are the successful components to a good body transformation?

Obviously a good diet – what they're eating is so important.

Then in the gym it's a weights-based session followed by an interval session as well, so it raises their heart rate which carries over to the next day because their metabolism kicks up.

The reps change throughout the transformation too. So we start around 12 reps then as each session goes on it drops down to 8-10s and then 6-8s as well. This is so the body doesn't plateau. It keeps your body on its toes, so to speak, so you don't get used to one way of training.

People want to stay in their comfort zone but I have to try and push people out of that.

Does some of your athlete training – particularly the spring interval work – carry over to helping people transform their physiques?

Yes definitely. Especially the cardio at the end of the sessions. It's very beneficial. If you want a transformation and you want to lose fat, doing intervals will really help. It's because you're keeping the heart rate raised and keeping changing the interval durations.

What are the things that are important to build muscle – things you've done as an athlete – that can be important for transformations.

Definitely working on cycles for hypertrophy and using compound lifts as well.

Recovery time [in between lifts] is key too. If you're just having one minute rest in between sets then you're not going to build any muscle. But if you're having two or three minutes in between each lift, then you will be doing enough damage to the muscle fibres in order for them to grow.

If you're doing a more cardio-based workout (lower weight, higher reps) then you'll need less recovery. If you want to build muscle then just extend the time you're resting or recovering.

We mainly use barbells and dumbbells work and focus on compound lifts. Then at the end do bodyweight circuits, rowing or bike intervals or sprinting as well.

What is the best nutrition strategy for body composition then?

Where I work, we have someone working specifically on nutrition. But the first 12 or 14 days they're off carbs – so just veg, good fats and protein. That shocks the body into using the fat stores as energy rather than storing it.

Then after that they have a carb refeed so like sweet potato, oats or quinoa after a session. Then they only have carbs on the days they're at the gym. So it's carb cycling.

It is almost the same as when I was an athlete. As a sprinter I didn't need that many carbs. Obviously I would have them on days that I was training. But if I was a long distance runner I would need more carbs for fuel.

What key tips can people take from your time as an athlete to improve their health, their fitness or their body?

Definitely do compound lifts in the gym. Also interval cardio rather than plodding along on a treadmill for 20 minutes because the heart rate goes up and down so you get more metabolic change rather than just being at one speed on a treadmill and you will get fitter quicker that way.

Carb cycling is another big one – having a week off carbs and getting plenty of good fats like nuts and seeds. Then having a re-feed of good carbs like quinoa or oats.

What exercise would it be to get the most benefit from?

My favourite exercise is deadlift. It's a whole body workout. It literally works everything. Either trap bar deadlift or just a regular barbell, it's good to mix it up.

popular
QUIZ: Can you name these forgotten men of Arsenal's 2000s?
Deep fake meme lads sing sea shanty that will make you want to abandon your childhood sweetheart and circumnavigate the globe
QUIZ: Identify which of these 50 players played with Wayne Rooney
QUIZ: Name the films referenced by The Simpsons
Netflix announces new true crime documentary about terrifying LA hotel
Rishi Sunak planning one-off £500 payment to benefit claimants
The JOE Friday Pub Quiz: Week 226
You may also like
Sport
Cristiano Ronaldo tells us the one exercise that gives such power to his legs
Sport
Adebayo Akinfenwa interview - "Breaking my leg forced me to adapt my game"
Fitness & Health
Female bodybuilder hits back at internet trolls
Fitness & Health
What they don't tell you about bodybuilding photoshoots
Fitness & Health
Why skinny teas don't help you lose weight
Next Page