If you're looking to pack on some size over the winter, now is the perfect time to start.

But if anyone knows how to bulk like a pro, it's Harlequins and England rugby star Chris Robshaw.

END_OF_DOCUMENT_TOKEN_TO_BE_REPLACED

The 30-year-old forward, who is 110kg of lean muscle, has built himself into the ultimate machine.

But everyone has to start somewhere - even Robshaw had to forge his strength and size piece by piece.

The 2012 Six Nations England captain has not suddenly gone out and started eating 6,000 calories like The Rock, he's been slow and methodical with his diet and training.

But it gets results.

Robshaw talked to JOE about how he has built his physique, the essentials to a bulking diet and how to train to build muscle mass while remaining lean and functional.

How did you go about the slow and steady process of bulking yourself up and adding muscle sustainably?

When I look back to the early couple of years, in my first couple of years at the club, I had some bad lower leg injuries. It forced me to use the gym more than I would have otherwise to put on that bulk around that. 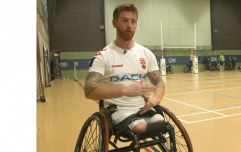 END_OF_DOCUMENT_TOKEN_TO_BE_REPLACED

Primarily it’s about eating the right things at the right times. So someone like myself, if I don’t have the right kinds of supplements and the right kinds of foods, I can lose weight throughout the season. Just because you can get a slight knock or a niggle, you maybe you don’t quite work as hard one week, so you might not eat as well.

So for me personally, what do I do? I don’t eat too much fish, so I have omega fish oils in the morning with some multivitamins. I have some eggs as well, so again – having goods foods.

It depends on the day too. If it’s Tuesday I’ll have a bit more carbs in the morning, because that’s our heavier day traditionally.

As soon as we finish training I have a Maxinutrition whey protein, because I don’t want to eat straight away after training and normally I’m not hungry.

But you need to get some calories in to replenish your muscles and keep that size on predominantly.

Then in the evening, if it’s been a tough day or I’ve worked hard, I’ll have a casein which gives me slow release protein throughout the night to replenish.

So you use different tools for different times of the day regarding your nutrition?

How important are carbs for you around games or around these big gym sessions?

They’re very important. Traditionally straight after training, so then that meal we have our carb-based stuff.

I always think the day before the game is more important food-wise than the actual game day, because you want to be light and you don’t want to have too much in you.

So on game day I’ll probably have some eggs in the morning, a whey protein shake and then a couple of sandwiches and maybe a banana – just something light, so you don’t have too much food in you.

The day before you’re probably trying to eat quite a lot in preparation?

Is it a conscious decision to just eat fats and protein first thing in the morning then? Do you find that works well for you?

Again it all depends on  the day. If it’s a particularly hard day, then we’ll normally have some more carbs in. Maybe some porridge or something on a Tuesday. But on a Thursday when it’s not quite as hard, we may cut that out.

Like I said before, it’s just making sure you’re getting the right things and the right times and knowing when to have it is hugely important.

What kind of calories levels are you trying to hit, considering your size and the amount of exercise you’re doing?

We’re lucky that at both club and international level, we get our foods provided. Of course you’re having a bit of food at home, but around training  and in between training we’re having meals as well to make sure we’re getting the right calories and the right kinds of food inside us.

So for example, if you’re trying to add size pre-season or you’re quite early in your career, what can you do nutritionally? What are key things that you can do? Do you need to look at increasing your calories?

Yes very much so. Calories and supplements at the right time, really. But also not going absolutely hell-for-leather, but doing it gradually. Knowing what your intake is at the moment. There are a lot of apps out there which can calculate these things for you, so it’s a matter of finding one of them and then keying in your food. So you can see ‘this is where I’m at, and this is what I need. I need to put on bulk so I’m going to add an extra protein shake or an extra bit of porridge in the morning.’

Then it’s a case of where does this lead to? Do you feel better? This is instead of going hell-for-leather and eating seven meals a day compared to three meals a day.

Everything should be in moderation, but you’ve also got to make sure you’re training with it as well.

So what are your daily protein levels like? There are differing views on how much you need to put on muscle, but with you as a professional sportsman and athlete, what do you think is a decent level to increase lean muscle mass?

We’re probably looking to have a protein option with most meals – whether that’s eggs, chicken, red meat or fish. We’re always looking to have some involved. But also with that balance of veg as well.

I try not to be too regimented with it. We know roughly what we need to really.

With a lot of the guys in the sport and in their professional set-ups, there’s nutritionists who you can go and speak to. We get the deadly skin calipers come put every now and then, so if you are going the wrong way, they’ll let you know and you would have to adjust. Or if you do want to bulk up they would encourage you to eat certain foods at certain times.

So yes, you do have to adapt it at various stages throughout the year, but generally you’re pretty similar.

There is a lot you try and avoid. But whether you do or not, is another thing. There are things you should avoid, but you need a good balance as well and allow yourself to have those cheat meals from time to time, otherwise it can be pretty tough.

We’re only human, so on a Saturday after the game you go out for a meal with your mates and enjoy yourself. But come Sunday, you’re back on it and you’re ready to eat the right foods and the right supplements.

What are the fundamentals of gym work that have enabled you to give you the size and the strength you need to compete at the elite level?

For us guys we do three weights sessions a week. Monday, because you’re still recovering from the games, will generally be upper body - half an hour and a kind of top up, so to speak. So you’re not doing anything ridiculously heavy, you just put some good weight through the upper body to get you working again and moving again.

Tuesday is our heavy leg day. So it depends on what suits you. It could be a squat, a deadlift or anything along those lines.

Then we have other leg exercises as well. Some guys might do prowler or split squats. That’s maybe 45 minutes to an hour session

The Thursday we’re probably doing a bit of power training with a more heavier upper body work too.

Is there a specific reason you do power training and is it put as the final session of the week for a game-specific purpose?

Yes we do because we train traditionally on Thursday as a quite sharp and intense session, which is a little bit shorter and sharper so you’re that little bit more explosive.

The power element really comes into it, so you’re a little bit quicker and a little bit sharper. If guys want to do a bit of speed training then that comes in on a Thursday too.

Tuesday’s are our harder days and you’ve generally recovered from the game by then so you can have a good leg session, you’re back firing and you can really test yourself.

For the heavy strength day, what kind of movements are you doing and what kind of rep ranges are you using? Are you going for strength or hypertrophy?

We’re doing potentially sets of four and then between four and six reps.

You always want to try and at least maintain or build strength throughout the season.

But pre-season is predominantly where we put on our bulk and size and strength, really.

What are the kind of key things you do to put on size pre-season?

So we do a lot of prowler and sled work. So that’s probably a 20m shuttle, with a good bit of weight on, in shuttle form – so you and your partner will kind of interval with that as a fitness but good weights session.

A lot of rugby is down in that position, especially us forwards whether it’s tackling or leg driving through compacts. You’re down in that semi-squat position, driving forwards, so you need to have that explosive speed driving in that direction.

It’s really trying to accelerate with it (the weight) so you can develop that power.

With the more power-based movements, do you do Olympic lifting as well?

Are you always looking to set and then beat rep-maxes in pre-season to get that pre-season.

Yes we are. We’re all pretty competitive and we’re all looking to push each other and out-lift all of each other.

So we do have that element in us, which is great when you’re training and you want to push each other and have that camaraderie between each other.

What are your numbers like pre-season in the big lifts?

I’m probably in the middle. We vary it, because we come back a little bit later in pre-season so as forwards we’re playing a little bit of catch up. So I’ll probably bench four fours (four sets of four reps) on 120kg, shoulder press probably four fours on 95kg and squat probably 140kg for four fours.

Then you’ve got the props who are probably doing 200kg with the squats.

For someone starting out, if you think back, what’s a different regime to follow to build size and strength quickly?

Throughout the weeks you have to put the time in first and foremost. They don’t have to be long sessions, to be honest. Probably half an hour to 45 minutes you can have a good, proper workout.

Knowing what you’re doing is important too, so having a session with a personal trainer or something and knowing how to lift properly.