He was just as iconic as Hulk Hogan or Randy Savage

Even if you were too young to be alive in the Hulkmania era, if you ever watched wrestling, you knew Mean Gene Okerlund. He was part of so many classic moments in the company's history that his face was a constant fixture whenever they cut to a historic montage or vintage highlight reel.

Standing next to larger than life superheroes like Hulk Hogan, Randy Savage and The Ultimate Warrior, was this little-mustached man, who looked like your dad, or uncle, or maybe your maths teacher, optimistically pushing a microphone in their face in hope of getting some pre- or post-match words.

Mean Gene played a vital role in the most cartoonish era of the then-WWF. He was the normal person that made these bizarre specimens seem even weirder.

Obviously, his diminutive stature made Hogan's throbbing muscles or Andre The Giant's gargantuan height seem even more impossible (even if the wrestlers were sometimes stood on a box to give them a few extra inches) - but it was far more than just the size difference.

When you had this normal dude who looked like he worked for the tax office stood next to colorful characters like Papa Shango or George 'The Animal' Steele, just staring at them when they went off on one of their staggering, insane ramblings, it made the spectacle that bit stranger. He was the straight man, the Martin Freedman to the wrestler's  David Brent and Gareth Keenan, the Jason Batement to their rest of the Bluths.

Just as David Lynch knew to put his surreal imagery into the relatable setting of suburbia, to give it that real impact, having this regular normcore guy in contrast to Randy Savage or Ultimate Warrior really brought out the living-cartoon quality of the men. 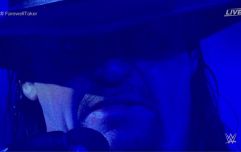 END_OF_DOCUMENT_TOKEN_TO_BE_REPLACED

This is not to say that any schlub could have done it - Mean Gene was subtle (a quality often missing in WWE), smart and quick-witted. In wrestling, it is not just the competitors that control the show - everyone else, including the referees, the announcers, and commentators, all work together to create the reality presented in front of you. And Okerlund played his part perfectly.

Starting out as a radio DJ, Okerlund became a ring announcer and interviewer for the American Wrestling Association in 1970.

When Vince McMahon began buying up all the biggest wrestling talent for his burgeoning WWF in the early 1980s, Okerlund would be one of the names he poached from the AWA. Okerlund spent nine years with McMahon's company, and was a vital part of many of the most iconic moments in WWE history.

He then would join World Championship Wrestling in 1993, after his contract expired, but returned to the place he made his name when WCW went under in 2001 and WWE purchased their assets.

From then on, he signed a lifetime contract, and for the rest of his days, he continued to make warmly-received appearances on WWE television - especially when a nostalgia pop was needed.

His final appearance was interviewing AJ Styles on the 25th anniversary of Monday Night Raw, in January 2018. And despite his age, he hadn't missed a beat.