True to their word, the show contained Royals and there was a lot of variety.

Last night's Royal Variety Performance provided viewers with the usual spectacle of song, dance, theatre and comedy. But all eyes were on the Royals for their thumbs up or thumbs down evaluation of each individual act, signalling whether or not these brave gladiators would be sent to slaughter. 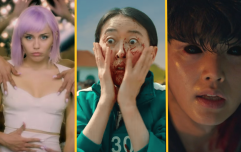 END_OF_DOCUMENT_TOKEN_TO_BE_REPLACED

William and Kate were sufficiently palatable throughout the festivities, at times giving us a glimpse into the inner workings of their affluent minds, when the lighting and camera conditions allowed it.

Behold, the highlights of their airtime on last night's Royal Variety Performance.

Then Prince William literally galloped because a small child asked him to, and he didn't want to seem like a dry arse

Yes, I have made this available in gif form

Once the proceedings ended, they were quick to get out of their seats so as to beat the traffic home

Finally, Kate failed to notice it, but Christopher Dean found his new Torvill