Is there anything Tom Cruise can't do?

When he's not performing his own insane stunts, the Mission: Impossible star must spend his time singing in front of the mirror - judging by this video anyway. 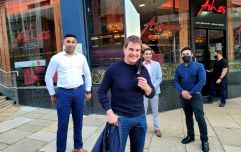 END_OF_DOCUMENT_TOKEN_TO_BE_REPLACED

Cruise was on Jimmy Fallon on Monday to promote his new blockbuster Mission: Impossible - Rogue Nation, and was challenged to a lip-sync battle by the presenter.

The video is one long highlight reel from start to finish. Fallon demonstrates an immaculate Mick Jagger impression while Cruise gives an eerily earnest performance of The Weeknd's 'Can't Feel My Face.'

The pair inevitably end up lip-syncing 'You've Lost That Lovin' Feelin'' together, serenading a woman in the crowd. Brilliant...

popular
Man with world’s biggest penis says Oscar winner slid into his DMs
'Super recogniser' draws 'accurate' modern Maddie McCann to help police find her
Woman wins millions after suing mum's GP for allowing her to be born
Congressman and family pose with guns for Christmas photo days after school shooting
Mum in jail for murder pays tribute to son, 6, killed by his dad and new girlfriend
Bride faints on groom, vomits and gets pooed on during ceremony
Chilling video shows moment step mum tried to get away with murdering boy, 6
You may also like
Quiz
QUIZ: How well can you remember the movies of 2020?
Film
Mission: Impossible 7 crew members reportedly quit following Tom Cruise's Covid outburst
Film
Tom Cruise goes mad at film crew for not following Covid-19 precautions in leaked audio
Film
Watch Tom Cruise jump off a giant cliff on a motorbike for Mission: Impossible 7
Entertainment
Jimmy Kimmel has hilarious theories on why Justin Bieber wants to fight Tom Cruise
Next Page