He genuinely thought it was cool at the time.

We’ve expressed our admiration for The Rock on numerous occasions in the past.

END_OF_DOCUMENT_TOKEN_TO_BE_REPLACED

He’s funny, he’s a beast in the gym, he's seemingly very well connected, and he comes across as very down-to-earth and a man you’d happily share a pint with.

He appears to dress pretty sharply too - but that wasn’t always the case.

In fact, you more than likely have come across a picture of The Rock from his early days, dressed in a black turtleneck and blue jeans, with an oversized chain hanging from his neck and a bum bag, or fanny pack, hanging around his waist. 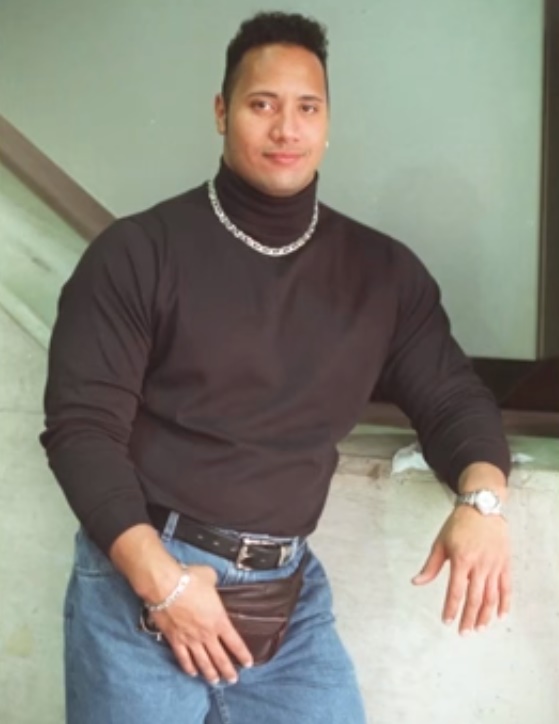 So infamous is the outfit that, as Graham Norton mentioned on last night’s show, it is now worn at fancy-dress parties and by celebrities taking the piss out of their colleague, like Seth Rogen.

The Rock’s fellow guests on the show, Liam Hemsworth and Jeff Goldblum, even got in on the act.

Clip via The Graham Norton Show

It’s fair to say that the jeans, turtleneck and bum bag have long been burned at this stage.

popular
Tobey Maguire Spider-Man spotted in No Way Home merchandise
The JOE Friday Pub Quiz: Week 271
Over 200 kilos of cocaine with Liverpool FC branding seized
Ava White, 12, dies after Liverpool stabbing - four boys aged 13 to 15 arrested on suspicion of murder
A definitive ranking of every swear word from worst to best
Pundits criticised by scientists for linking player collapses to vaccines
BT Sport release statement as Chris Sutton is denied access to Ibrox again
You may also like
Entertainment
Santa gets a boyfriend in tearjerking new Christmas ad
Entertainment
TV host 'mortified' over Adele interview blunder
Entertainment
Ant and Dec kick off I'm A Celeb by mocking Ole Gunnar Solskjaer
Entertainment
Tesco Christmas advert becomes the most-complained about TV ad of 2021
Entertainment
‘Gordon, Gino And Fred’ to come to an end after this season
Next Page