One of the highlights of Saturday Night Live is watching famous people trying to keep a straight face while hilarious people are being hilarious around them, and failing terribly.

We bring this up because McKinnon herself was on the receiving of the "corpsing" (that's what cracking up and ruining a take is called, FYI) when she shared a skit with legendary comedian Louis C.K.

They played actors in an interactive museum which brought visitors back to the early 20th century, and McKinnon and C.K. played a poor Polish couple who have some very "old school" opinions (read: entirely, 100% racist) about a specific group of people.

However, while C.K. is one of the greatest joke-makers of all time, if there is one thing he can't do, it's accents, so his attempt at a Polish man ends up coming off more than a little Borat-y.

As the host of the episode - which also featured Alec Baldwin playing both Bill O'Reilly and Donald Trump - C.K. also presented the opening monologue, which has previously gotten him into a bit of hot water when he made jokes about racism or child molestation. 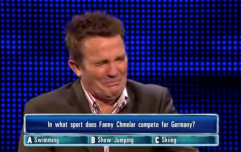 END_OF_DOCUMENT_TOKEN_TO_BE_REPLACED

This time, he tells "not a racist joke, but a joke about a racist chicken", before moving on to giving his bizarre interpretation of the inner monologue of random animals, and then landing on how becoming rich and famous has ruined hotels for him.

Obviously, because it's him, it is all very, very funny.

All clips via Saturday Night Live