Big news for fans of The Walking Dead.

Collider have reported that Andrew Lincoln, better known as Rick Grimes in The Walking Dead, will be walking away from the show after season 9. 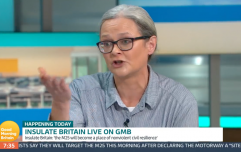 END_OF_DOCUMENT_TOKEN_TO_BE_REPLACED

The same report states that Rick will only feature in half-a-dozen episodes of the upcoming season before calling it quits.

Lincoln has been a feature of the show since the very beginning, playing the sheriff-turned-apocalypse leader, but his future involvement has been the focus of much speculation in recent months. In fact, we even had the endless theories and speculations about Rick's 'death.'

To fill the void in the show’s leading man status, AMC are rumoured to be offering an improved financial offer to long-running series star Norman Reedus.

Us Weekly have elaborated on this report after an unmanned source said: “Andrew is leaving because he’s had enough of it and wants to focus his energy on movies."

This isn't the only changeup that has happened on the show in recent months. Rick Grimes’ son Carl (Chandler Riggs) was killed off last season, and there are rumours that Lauren Cohan (Maggie Greene) might be the next one to leave.

popular
'My disabled client and I have great sex - he has same needs as everyone else'
Influencer criticised for photoshoot at her dad's funeral
Man knocked out in single punch by ASDA security guard and dragged across floor by his hoodie
Miralem Pjanić rubs salt in the wounds after Koeman sacking
Cristiano Ronaldo announces his girlfriend is pregnant with twins
Gordon Ramsay hits back at radio host for 'fat-shaming' daughter Tilly
Caitlyn Jenner says Dave Chappelle is '100% right' over Netflix controversy
You may also like
Entertainment
Real life Squid Game coming to UK and you have to sign a 'medical disclosure' to play
Entertainment
Chris Ayres, voice of Frieza on Dragon Ball, dies aged 56
Entertainment
George Alagiah taking break from BBC News after cancer spread
Entertainment
Will Young says Grand Tour's Richard Hammond is ‘the worst’ for ‘homophobic jokes’
Entertainment
North Korea says Squid Game depicts South Korea's 'beastly' capitalist society
Next Page