VIDEO: Macaulay Culkin is back as an x-rated version of Kevin from Home Alone

So, this is how Kevin turned out. 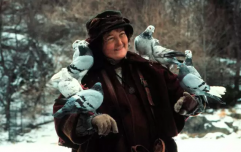 END_OF_DOCUMENT_TOKEN_TO_BE_REPLACED

This is the first episode of :DRYVRS, a new comedy web series from actor and musician Jack Dishel, and it stars our favourite child actor-turned-bearded hippie, Macaulay Culkin, as an updated version of Kevin from Home Alone.

For anyone who thought that he emerged unscathed from twice foiling two psychopaths (who never, ever swore), you may think again. This is dark, and shows the psychological damage done to Kevin by his careless parents.

We also learn that he never got the full story about what happened to his mother in that van with John Candy's polka troupe.

popular
New video of Wayne Rooney on night of ‘stitch up’ pics emerges
Conor McGregor deletes disgusting tweet about Khabib's dead father
Man who claims he’s Charles and Camilla’s child is now using his son as ‘proof’
Police find 48TB of 'mostly adult' material in Shilpa Shetty's home after husband's arrest
Filipino Olympic weightlifter will be given $660,000 and 2 houses for winning country's first gold
Men should ejaculate at least 21 times a month, according to study
Eddie Hall's monstrous 500kg deadlift had some horrific-sounding consequences
You may also like
Entertainment
A performance review of Donald Trump's cameo in Home Alone 2
Entertainment
Home Alone fans are freaking out over a piece of trivia about the film
Entertainment
QUIZ: The hardest Home Alone quiz you'll ever take
Entertainment
Ryan Reynolds is making a stoner version of Home Alone
Entertainment
Macaulay Culkin reveals disturbing reason he left Hollywood as a child
Next Page