The Londoner recently shot to stardom for his portrayal of Finn in Star Wars: The Force Awawkens, but it's his off-screen antics that have earned Boyega a cult following already. 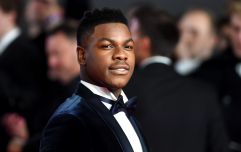 END_OF_DOCUMENT_TOKEN_TO_BE_REPLACED

We were impressed with his humility when we spoke to him last year, and it's clear to see why he's so grounded when you watch this video.

Boyega picked up the EE Rising Star award at Sunday night's BAFTAs and the British actor rushed home to celebrate the win with his cat (and his snapchat followers).

Unfortunately for the Star Wars star, his cat couldn't have cared less.

popular
Shocking footage shows moment man is killed by his own brothers
Addison Rae banned from TikTok
The JOE Friday Pub Quiz: Week 265
'Neighbour from hell' booted out of a retirement home for getting naked and threatening to stab resident
Gary Lineker pulls out of presenting MOTD due to 'super cold'
Man Utd defend decision to make 10 minute flight to Leicester for Premier League clash
Ole Gunnar Solskjaer to remain Man Utd manager despite run of poor results
You may also like
Entertainment
First images of the CGI remake of Watership Down have been revealed
Entertainment
Star Wars: Episode IX will be 'all-out war' as Rey and Finn reunite
Entertainment
John Boyega reveals truth about Prince William and Harry's Star Wars role
Entertainment
John Boyega shut down a troll who told him to 'stay out of American politics'
Entertainment
John Boyega is definitely playing Pokemon Go while filming for Star Wars Episode VIII
Next Page