Models are just like us! (Except, y'know, way better looking...)

Taking on the catwalk for a Victoria's Secret fashion show is one of the most sought after positions for any model out there, and is the kind of make-or-break moment that can send unknown models into the stratosphere.

END_OF_DOCUMENT_TOKEN_TO_BE_REPLACED

This week the show took place in Shanghai, and one of the models that took to the stage was 28-year-old Chinese model Ming Xi, who walked out in some giant wings and very little else.

However, half way through her strut, it looks like she stood on the edge of her night-gown, and trips over her feet.

However, the whole thing has a happy ending, as Brazilian model Gizele Oliveira came back out on to the catwalk, helped Ming Xi back to her feet, and applauded her as she finished off her lap of the stage.

Gizele is a true angel by helping Mingxi when she fell ??? pic.twitter.com/yhtqVovzne

With fashionistas all over the world watching, pretty much everyone had the same sympathetic reaction for the model.

When VS model Ming Xi falls on the runway & reminds us they’re all slightly human too... 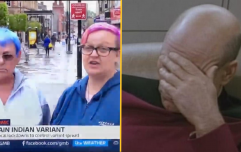 END_OF_DOCUMENT_TOKEN_TO_BE_REPLACED

The model herself took to Weibo (China's version of Twitter) to make a mini-statement on the trip:

"I’m sorry I disappointed everyone, thank you all for your concern, being a model for 7 years, I’ve fallen countless times on the way... but I know regardless how painful it is, I have to stand up, finish walking. I’ll continue walking on. TY"

Good advice for everyone, really.