Daniel Craig has repeatedly said he wants to give up the role.

Tom Hardy has responded to the rumours that he will replace Daniel Craig as James Bond via his Instagram.

A number of publications shared fake April Fools' articles yesterday, saying that he had accepted the role.

However, following the #FakeNews, the Peaky Blinders star shared a screenshot of one of the articles and wrote that he was 'good to go'.

The 40-year-old said: "Dammit I was in my tux and on the runway good to go. No drama. Return to base. Headed back to Nola stood down 19." 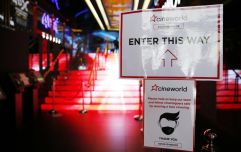 END_OF_DOCUMENT_TOKEN_TO_BE_REPLACED

I mean, obviously he could just be taking the piss here, but on another level, the fact he isn't denying he would take the role is pretty big news for fans.

Hardy has been the favourite to play the role for years and clearly, people are loving it as it has received over 185,000 likes from fans so far.

It comes after Daniel Craig was asked if he'd like to play 007 again last year, to which he replied 'now? I'd rather ... slash my wrists'. Luckily he later reserved the decision and will star in the next film in the franchise, which will be directed by Danny Boyle.

What will happen after that remains anyone's guess though.