Tom Hanks has put together a short Toy Story movie for two of his biggest fans, 9-year-old twin boys, Hassan and Hussein Benhaffaf, after learning of their story.

END_OF_DOCUMENT_TOKEN_TO_BE_REPLACED

In the movie, we see Hanks match his actions to the theme of Toy Story's much-loved song 'You've Got A Friend In Me', resulting in two Woody dolls both being signed by Tom Story's "Andy", and the other foot being signed by Hanks for each of the boys.

They were born as conjoined twins in 2009, and one year later they underwent a successful surgery that separated them, but have had significant health problems in the years since then.

Ice cream parlour owner Miceal O’Hurley got in contact with the actor, having built up several connections when he worked in Hollywood, and told him about the two young boys.

"We got the video at 3am and my wife Oksana and I sat up in bed in tears. The thoughtfulness. The kindness. The generosity of spirit of his act was extraordinary," O'Hurley told The Irish Times. 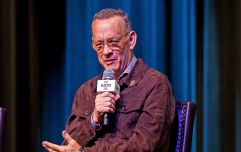 END_OF_DOCUMENT_TOKEN_TO_BE_REPLACED

"I think what I love about Tom Hanks is that if he wasn’t a mega star, and he was the local guy in the hardware store, he would still go out of his way to be a decent person. Tom wanted the boys to know that he admires them and wants to be their friend."

Donations can be made to the ongoing care of the twin boys here.

popular
Incredible case of the only known individual whose parents were two different species
Jurgen Klopp reacted like everyone else to Darwin Nunez headbutt red card
Man, 27, who is engaged to great-great-grandmother, 74, slams critics of his 'perfect' relationship
Landlord faces £40k fine after tenant puts swimming pool on roof of flats
Bulgarian mystic who correctly predicted Princess Diana’s death and 9/11 sees 2022 prophecy come true
Graeme Souness 'doesn't regret a word' of 'man's game' comments that sparked sexism row
Angry woman confronts blind man at gym and accuses him of starting at her
You may also like
Entertainment
Tom Hanks’ son Chet says he did not have a ‘strong male role model’ growing up
Entertainment
The Band of Brothers sequel has begun filming
Quiz
QUIZ: Can you identify the Tom Hanks movie from a single image?
Film
Toy Story IRL: How two brothers spent nearly a decade remaking the Pixar classic with real toys
Film
Tim Allen reveals Keanu Reeves has a secret role in Toy Story 4
Next Page