Tonight's awards ceremony is certain to be a major talking point tomorrow.

While the nominees head into the show with no clear indication as to who will win the major prizes - at the moment it is a bit of a three-way tie between The Post, Three Billboards and The Shape Of Water for Best Drama, while Lady Bird and Get Out lead the pack for Best Comedy - everyone in attendance will be keeping an eye on the actual audience themselves. 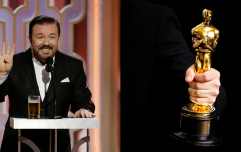 END_OF_DOCUMENT_TOKEN_TO_BE_REPLACED

The host for the 75th ceremony, Seth Meyers, told The Hollywood Reporter that he purposefully plans to avoid making a single joke about Donald Trump:

"If he tweets that he’s disappointed we didn’t bring him up, I’d be thrilled. That would fly in the face of what currently he believes is the problem, which is that we won’t stop talking about him. [...] I’m reserving the right to change my mind. But especially this year with everything that’s happened in Hollywood, it seems far more important to have the focus there as opposed to anything that’s happening in Washington."

Actresses such as Meryl Streep, Emma Stone and Jessica Chastain will be part of the group that will attend the awards, as well as some who will be presenters through the night, and will be wearing all black as part of a silent protest against sexual harassment.

However, one Hollywood actress is hoping to take things one step further:

Westworld actress Evan Rachel Wood is asking for attendees who may not be in a position to make a public announcement verbally to do so physically, by creating a circle around those they know to be a "predator".

Wood is hoping that this will bring more of the harassers out into the public eye, or force them to not show up the awards ceremony in the first place.

The ceremony will kick off at 1am GMT, with the red carpet being covered on E! from 11pm onwards.

popular
Shocking CCTV shows moment rival gangs engage in fierce gun fight in broad daylight
Internet left confused after hearing Salt Bae's voice for the first time
A definitive ranking of every swear word from worst to best
Barmaid dies after telling friend she had been spiked in nightclub
FIFA to test automatic offside technology next week in preparation for Qatar World Cup
Kylian Mbappe 'getting closer' to Real Madrid transfer next summer
Here's how to see who's been taking screenshots of your Instagram Stories
You may also like
News
Nicola Coughlan slams podcast host who called her 'the fat girl from Bridgerton'
Entertainment
Chadwick Boseman's wife accepts Golden Globe award on his behalf
Entertainment
HBO boss confirms every episode in Game of Thrones season 8 is like 'watching a movie'
Entertainment
Idris Elba trolls James Bond fans with Golden Globes selfie
Entertainment
WATCH: The Golden Globes' opening monologue has really divided opinion
Next Page