The Rock says he is considering running for president

Dwayne 'The Rock' Johnson has hinted at a potential presidential run at some point in the future.

END_OF_DOCUMENT_TOKEN_TO_BE_REPLACED

After leaving the WWE, The Rock has enjoyed a hugely successful career in Hollywood. Could he follow in Arnold Schwarzenegger's footsteps by embarking on a career in politics?

The 48-year-old's recent comments would certainly suggest so.

In an interview with USA Today, he said: "I would consider a presidential run in the future if that's what the people wanted.

"Truly I mean that, and I'm not flippant in any way with my answer. That would be up to the people.

"So I would wait, and I would listen. I would have my finger on the pulse, my ear to the ground."

Johnson is the subject of a new sitcom, Young Rock, which looks back at his life so far through a comedic lens. 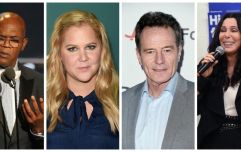 Will all these celebrities keep their promise to leave the US if Trump got in?

END_OF_DOCUMENT_TOKEN_TO_BE_REPLACED

It is set in 2032, when the older Rock runs for president. His recent comments suggest it isn't that far-fetched an idea.

Back in 2017, The Rock told Ellen Degeneres that he was "seriously considering" running for the highest public office in the United States.

The world's best-paid actor, The Rock publicly backed Joe Biden ahead of the 2020 presidential election. He also said he cried "very manly tears" when Biden won.

In a video posted to Instagram on November 8th, 2020 - the day after Biden was projected winner - The Rock revealed why the success of the Democrat nominee and his running mate Kamala Harris meant so much to him.

"The reason I got emotional yesterday was because of what I felt my vote represented.

"My vote represented my little girls. It also represented humanity, decency, and the principles and values Lauren my wife and I instil in our little daughters.

Whatever happens, scenes such as this would probably look out of place in the Oval Office.

popular
Ricky Gervais finally says what we're all thinking about the Johnny Depp Amber Heard case
Binley Mega Chippy: What is it and why is it all over my timeline?
New Time Traveller's Wife series airs 'incestuous' oral sex scene that has left everyone divided
Gangland enforcer charged £6K to attack victims with acid and £10K to blind them
The JOE Friday Pub Quiz: Week 296
Japanese man spends £12,480 to look like a border collie - and it kind of works
Wimbledon to drop Mrs and Miss on women’s honours board to match men's titles
You may also like
News
Woman missing for over week in dense forest found sitting on tree singing 'Amazing Grace'
News
Teen shot dead by boyfriend after being mistaken for a panther in prank gone wrong
Sport
Why the US men's national team wore beer goggles during World Cup celebrations
Sport
USA celebrate World Cup qualification - despite not qualifying yet
News
Iran returns 820,000 vaccine doses as sixth covid wave hits because they were US-made
Next Page