Where does the north begin?

We may argue a lot of things in this life. Politics, sport, culture, which foot to put your sock on first, whether you should put the tea bag into your mug before or after your milk, whether the moon is made of cheese, whether we should be allowed to marry the moon - these arguments continue to rage and likely will do until the end of time. 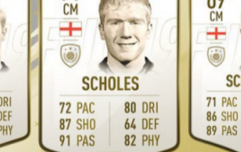 END_OF_DOCUMENT_TOKEN_TO_BE_REPLACED

One thing most people can agree on though is that the north of England is a wonderful place full of warm people and cold weather. But where the fuck does the north begin and the south end?

We took to the streets of a northern city to speak to locals and visitors and find out the answer to one of life's eternal questions.

The North of England. Everybody knows it's better than the South, but where does it start? Stoke? Liverpool? Newcastle?

We took to the streets with a map and a marker pen to settle the age-old debate once and for all pic.twitter.com/SSxvqFzzxf

popular
Tourists left 'squealing' as thousands of venomous crabs invade UK beach
Asda slammed for 'embarrassing poorer families' with new product redesign
Boris and Carrie put south London home on the market for £1,600,000
Runner finishes last in 400m race as penis keeps falling out of shorts
Delivery of new Leeds United shirts delayed after shipping containers were plunged into the sea
Massive piece of Elon Musk's spacecraft lands on farmer's property and could make him very rich
Inbetweeners star Joe Thomas has been in a relationship with his co-star for over 10 years
You may also like
Sport
England Lionesses pen powerful letter to Sunak and Truss after Euros win
Sport
Inside the UK's biggest sports bar - set to open ahead of 2022 World Cup
Sport
Gary Lineker criticised for tweet after England's Euro 2022 victory
Sport
Eddie Jones clashes with Australia fan calling him 'traitor' after England win
Sport
England to wear home kit against Northern Ireland to avoid colour blind clash
Next Page