The Graham Norton Show has an excellent line-up tonight

One of the best shows of the series.

Bad news. The football season is coming to an end with the Champions League Final.

Good news. The blockbuster season is just starting in your local cinema, and this is clearly seen by the guests that will be appearing on tonight's episode of The The Graham Norton Show because a plethora of Hollywood stars will be on the couch to talk about their movies.

Oh yes, we feel the need for speed. The biggest star on the planet (yep, he still is) is appearing in the the reboot of The Mummy where he will presumably be running away from the aforementioned mummy.

We wonder if we'll also get an update regarding the status of the newly announced Top Gun sequel.

Cruise's co-star in The Mummy, Annabelle Wallis, will also be on the couch to talk about the monster epic.

We wonder if Graham can get a few anecdotes about her work on Peaky Blinders where she played Tommy Shelby's wife, Grace.

END_OF_DOCUMENT_TOKEN_TO_BE_REPLACED

He's not in high school, or a musical, anymore because Efron is one of the stars of the new Baywatch movie along with Dwayne 'The Rock' Johnson, who unfortunately will not be on the couch beside him.

Mmm, we wonder if the iconic slow-mo walk from the original TV show will be re-created? Yes, of course it will!

We're certain that he'll have a few anecdotes about what it was like to "go one on one with the great one" also. 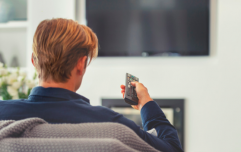 END_OF_DOCUMENT_TOKEN_TO_BE_REPLACED

You may have heard? If you did, you're probably very excited about it, but Wonder Woman is out in cinemas today.

So what better way to get yourself set to go see it over the weekend then to watch Gal Gadot on Graham tonight.

Given that she stole the show in Batman v Superman: Dawn of Justice and that her standalone adventure is earning really good reviews.

Music comes from Beth Ditto who will be performing her new single ‘Fire’.

You may also like
Quiz
QUIZ: Which actor is taller?
Entertainment
Brendan Gleeson is Donald Trump in first trailer for The Comey Rule
News
Grant Imahara, co-host of Mythbusters, has died aged 49
Entertainment
Jerry Stiller, actor and father of Ben Stiller, passes away aged 92
Entertainment
QUIZ: Can you guess the TV series from the intro lyrics?
Next Page