In news that will surprise absolutely no-one, The Emoji Movie has swept the board at Hollywood's infamous Golden Raspberry Awards show, otherwise affectionately known as the Razzies.

The film, which is obviously about emojis and obviously stars James Corden, did spectacularly well on the night, being described by the committee as a "talking poop-opus" and picking up awards for worst picture, director and screenplay.

Corden himself managed to evade the fierce grasp of the panel, presumably because the film was animated, as the worst actor award went to Tom Cruise for his work in this year's reboot of The Mummy, a movie he actually broke his ribs for whilst filming. Was it worth the sacrifice, Tom? 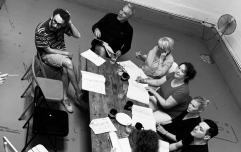 END_OF_DOCUMENT_TOKEN_TO_BE_REPLACED

The real awards will take place this Sunday during the 90th Academy Awards Ceremony, as actual pieces of art worth seeing Phantom Thread, Get Out and Three Billboards Outside Ebbing, Missouri go head to head for best picture.

Whilst I can guarantee that there will be no mention of The Emoji Movie, I can't promise that James Corden won't be milling about somewhere, pretending to be best friends with all the famous people and grinning like an idiot the entire time.

Still, I bet Daniel Day-Lewis hates him. We can at least take comfort in that.