The countdown is on... four months until the greatest movie ever made is released in cinemas

Once it comes out, Hollywood can just stop trying, because it doesn't get any better than this

There were a few 2018 movies that really grabbed our attention. 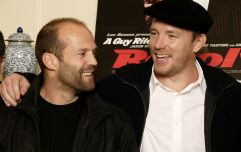 END_OF_DOCUMENT_TOKEN_TO_BE_REPLACED

The Hurricane Heist was one, which was basically Twister meets Ocean's 11, from the director of The Fast & The Furious. Amazing.

There was also Rampage, in which The Rock fights giant monsters in the city because... plot? Also amazing.

But ever since The Meg was first announced, there was never going to be any competition for Best Movie of 2018, if not the best movie of all time.

While it does sound like the spin-off movie for the daughter from Family Guy, it is actually about... no, you know what? We're going to let the official synopsis do the talking for us...

In the film, a deep-sea submersible — part of an international undersea observation program —  has been attacked by a massive creature, previously thought to be extinct, and now lies disabled at the bottom of the deepest trench in the Pacific… with its crew trapped inside.

With time running out, expert deep-sea rescue diver Jonas Taylor (Jason Statham) is recruited by a visionary Chinese oceanographer (Winston Chao), against the wishes of his daughter Suyin (Li Bingbing), to save the crew —and the ocean itself — from this unstoppable threat: a pre-historic 75-foot-long shark known as the Megalodon.

What no one could have imagined is that, years before, Taylor had encountered this same terrifying creature. Now, teamed with Suyin, he must confront his fears and risk his own life to save everyone trapped below…bringing him face to face once more with the greatest and largest predator of all time.” 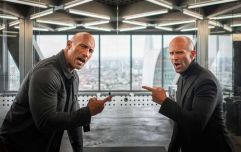 END_OF_DOCUMENT_TOKEN_TO_BE_REPLACED

Yep, The Meg is short for the Megalodon shark, a giant, ancient shark that Jason Statham has to kill.

The Meg is a movie about Jason Statham fighting a giant shark.

Do you understand now why this is the greatest movie of all time?

This is a HUGE blockbuster, and we might finally be getting some kind of spiritual sequel to Deep Blue Sea, and we are 100% here for that. 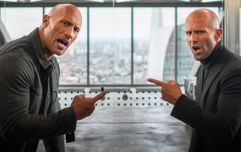 END_OF_DOCUMENT_TOKEN_TO_BE_REPLACED

Statham, Bingbing and Chao are joined by Cliff Curtis (Die Hard 4.0), Rainn Wilson (The US Office), Ólafur Darris Ólafsson (Lady Dynamite) and Ruby Rose (John Wick Chapter 2), and is all directed by Jon Turteltaub (National Treasure, While You Were Sleeping).

Oh, and we totally forgot the best bit.

The movie is based on a 1997 book (yes, seriously) titled Meg: A Novel Of Deep Terror, which is the first of EIGHT novels about the giant killer shark.

So if The Meg is a hit, which it definitely will be because it involves Jason Statham fighting a giant shark, then we can potentially expect at least seven more movies in this franchise.

The Meg is due to arrive in UK cinemas on Friday 10 August, and we will be checking back in each and every month until it comes in, because a movie of this magnitude (Meg-nitude?) deserves all the attention we can give it.

popular
Johnny Knoxville left with brain damage after bull stunt in Jackass Forever
Teen brothers arrested for 'beating stepdad to death after he abused their half sister'
The Beast opens up about mental health after storming off The Chase
Sex expert reveals how men can last longer in bed
Moment thug kidnaps teenage ex in horrifying ordeal that left her unable to walk or talk
Kieran Trippier pinpoints Daniel Levy's biggest mistake in the transfer market
Coronation Street star left homeless after sharing anti-vax views
You may also like
Film
New Fast & Furious: Hobbs & Shaw trailer its utterly wonderful, looks like the best film ever
Entertainment
The first trailer for Fast & Furious spin-off Hobbs & Shaw features a bulletproof Idris Elba
Film
The first look at Idris Elba in The Fast and The Furious spin-off is here
Entertainment
QUIZ: How well do you know Jason Statham movies?
Fitness & Health
The Jason Statham workout for strength and fat loss
Next Page