Supernatural is officially coming to an end after 15 seasons

The Winchester brothers have almost reached the end of the road

CW science fiction series Supernatural is coming to an end after 15 seasons on the air. The supernatural drama, which stars Jensen Ackles and Jared Padalecki, first premiered back in 2005.

The show tells the story of Sam and Dean Winchester, two brothers whose father raised them to go into the family business as hunters. Not deer hunters or bear hunters, but hunters of evil things, like demons.

Fans watched the Winchester brothers fight off just about every kind of supernatural being, including the big man, Death himself.

"Firstly, we would like to thank all the people who have been involved with the show both in front of and behind the camera. For us it has been an experience of a lifetime.

"The support we have had from both Warner Bros Television and The CW has been incredible.


"We’d like to give special thanks to Jensen, Jared and Misha for making this journey so special. It is now most important to us to give these characters that we love the send off they deserve." 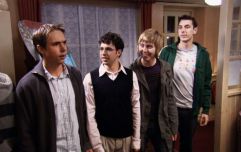 Introducing The Inbetweeners to a French person for the first time

END_OF_DOCUMENT_TOKEN_TO_BE_REPLACED

Jared Padalecki and Jensen Ackles were also joined by their co-star, Mischa Collins, in a video message for fans.

"We just told the crew that although we're very, very excited about moving into our 15th season, it will be our last," Ackles said.

"15 years of a show that has certainly changed my life - I know it has changed these guys' lives - and we just wanted you to hear from us that while we're excited about next year, it will be the finale.

"The big grand finale of an institution."

You can watch the full message below.

Hey #SPNFamily here’s a little message from @JensenAckles @mishacollins and me. I’m so grateful for the family that’s been built because of the show. Excuse me while i go cry. pic.twitter.com/QDXDsAyIfK