Stranger Things star wants Leonardo DiCaprio for the next series

She even has a part in mind.

You might know Millie Bobby Brown better as Eleven, the psychic badass who carries much of the Stranger Things universe on her adolescent shoulders. 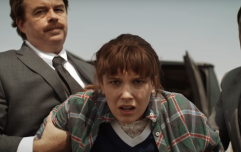 END_OF_DOCUMENT_TOKEN_TO_BE_REPLACED

Whilst undoubtedly an incredible actor in her own right, Millie has come up with another name she'd like to join her on set for a future series of the supernatural Netflix hit. In a recent interview she revealed that Leonardo DiCaprio would be a welcome addition to Stranger Things, and even knows what role she wants him to play.

The 14-year-old is the youngest ever entrant into TIME's 100 Most Influential People list, so whilst it may sound ridiculous, she could definitely pull some strings.

"Leonardo DiCaprio. Leonardo is Eleven’s long-lost brother. I have already made a story line," she said, speaking to Press Association.

She even added: "Leo, if you want to be in Stranger Things, here’s the contract."

Unfortunately shooting for the third series is already underway, meaning there isn't much hope of getting the Titanic and The Wolf of Wall Street star in for now, but you never know...

Sorry. I'll show myself out. Sorry.

popular
Shocking CCTV shows moment rival gangs engage in fierce gun fight in broad daylight
Paul Merson questions Manchester United decision to appoint Ralf Rangnick
Rangnick to set Man United squad brutal 'training test' to improve their intensity
Aaron Ramsdale wore Arsenal away shirt against Newcastle
'It's England or die' - life inside the refugee camps in northern France
BREAKING: Two cases of Omicron variant detected in UK
Ava White: Tributes to ‘unique and bubbly’ 12-year-old ‘murdered by a group of boys’
You may also like
Film
Netflix has launched a free section of shows that you don't have to subscribe to watch
Entertainment
QUIZ: Can you name the Netflix show from a single screen shot?
Entertainment
Every Stranger Things 3 character ranked from worst to best
Entertainment
QUIZ: How well do you know the first two seasons of Stranger Things?
Entertainment
Stranger Things Series 3: The scouting report no one asked for
Next Page