Australian daredevil naturist Steve Irwin was beloved the world over. His show The Crocodile Hunter mixed up wildlife education with a sense of danger and excitement. He wasn’t afraid to get up close and personal with dangerous animals, and it was definitely a different show to what Sir David Attenborough and the BBC do. He even transferred that fame into a Hollywood movie The Crocodile Hunter: Collision Course. 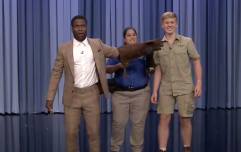 END_OF_DOCUMENT_TOKEN_TO_BE_REPLACED

In September 2006, Irwin was tragically killed when he was stabbed in the heart by a string ray, while filming at Batt Reef, near Port Douglas, Queensland.

Irwin’s family recently unveiled a star for him on the Hollywood Walk of Fame – right next to Johnny Cash’s star.

His 14 year old son Robert went on The Tonight Show with Jimmy Fallon to mark the occasion – and he is exactly like his father. Obviously he looks like his father’s son, but he’s got the same manic energy, enthusiasm, and love for nature. He even brought along some furry friends - including a herd of baby African pygmy goats named after the cast of Friends, and Cookie the Kookaburra, that imitated rapper Cardi B.

Robert has made several appearances on Fallon’s show, usually bringing along something incredible cute with him.

popular
Dr. Dre shares unbelievable video of Eminem's skills to prove no rapper could beat him
Eric Bailly fails spectacularly with no-look penalty in AFCON shoot-out
Collapse of sports crypto giant leaves fans with worthless tokens
'I'm so beautiful my friends don't invite me to birthday parties as I'll steal the show'
Why dogs are getting sick and symptoms owners should look out for
Warning issued to all dog owners as mystery virus spreads across UK
Katie Price joins OnlyFans days after arrest to 'empower women'
You may also like
Entertainment
A$AP Rocky's new single samples a classic Moby track everyone loves
Entertainment
WATCH: A tearful Jimmy Fallon pays an emotional and dignified tribute to his late mother
Entertainment
Bryan Cranston tells Jimmy Fallon about the time he was a real-life murder suspect
Fitness & Health
Jimmy Fallon convinced The Rock to eat sweets for the first time since 1989
Entertainment
Watch Jimmy Fallon's show band The Roots perform an excellent Game of Thrones rap
Next Page