Amongst all the excitement online buzz about Rogue One: A Star Wars Story, we haven't actually seen anyone ask what the 'Rogue One' part of the title actually refers to.

Don't get us wrong, being preoccupied with the prospect of seeing the legendary villain Darth Vader back on the big screen again is completely forgivable, but up until now the thinking behind the name of the movie has been a bit of a mystery.

Until now. Sort of.

Rogue One's director, Gareth Edwards, recently sat down with Empire magazine, and the conversation quickly turned to the spinoff's namesake. It has a pretty nice ring to it, but talking about a Star Wars film without involving the word 'episode' is a first for the series. Is that what inspired the title?

"I'd been thinking about it," he mused. "What does it mean? 'Rogue One’ is a military call sign to some extent, but this is the first film that's gone off-piste and is not part of the saga – or the Anakin story – so it’s the 'rogue' one, you know?"

But Edwards added that it could also be a nod to the dogged, Han Solo-like spirit of Star Wars' newest heroine, Jyn Erso. From what we've seen in the trailers she looks pretty rogue herself.

"It's kind of describing her as well in a similar way," he continued. "It has [all] these split, multiple meanings that made it feel like the right choice." 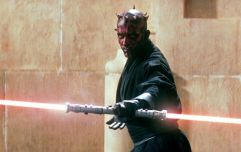 END_OF_DOCUMENT_TOKEN_TO_BE_REPLACED

Empire even asked Edwards if the title could be a little bit self-referential, which he didn't totally dismiss.

I don’t know…I never see myself that way. But, er… that’d be cool! We tried to do things different, for sure."

Glad we cleared that one up.

Rogue One: A Star Wars Story lands in UK cinemas on December 16.

popular
Jurgen Klopp argues with BT Sport interviewer over kick off times
QUIZ: Can you identify these cities highlighted on a map?
James Milner says he is "falling out of love" with football because of VAR
The JOE Friday Pub Quiz: Week 219
VAR would have disallowed Maradona's solo goal vs England, BT Pundits say
Donald Trump paid $3 million for recount that uncovered more Biden votes
QUIZ: How well can you remember the movie Elf?