It was widely forecasted that this year's Mercury Prize - famously difficult to predict - would be awarded to the late David Bowie, whose final album Blackstar was released to critical acclaim three days before he died of cancer in January. 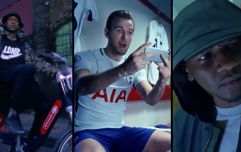 END_OF_DOCUMENT_TOKEN_TO_BE_REPLACED

But the night would belong to Skepta, the Tottenham-born star, who in winning the £25,000 prize for his fourth studio album Konnichiwa became the first hip-hop artist to do so since Dizzee Rascal in 2003.

As well as Bowie, Skepta's self-released, politically-charged album beat off competition from the likes of Radiohead, The 1975 and fellow grime pioneer Kano, who he acknowledged in a memorable acceptance speech.

Before Jarvis Cocker handed out the award, he poignantly noted that David Bowie would no doubt be looking down in approval of the winner.

"If David Bowie was looking down on the Hammersmith Apollo tonight, he would want the #MercuryPrize to go to...." pic.twitter.com/ifqqxKCR8I

After receiving a rapturous ovation as he made his way to the stage, Skepta took the mic and said: "I'm just so thankful. I've been trying to do this music stuff and work it out for so long... I was like' let's do it for ourselves'. All these songs, we've travelled the world - no record label, nothing. We just did this for us but the love is very appreciated."

He thanked just about everybody important to him before concluding with a tribute to his parents, who (brilliantly) joined him on stage.

"And lastly, my mum and dad, and all my friends mums and dads - because they made us, they gave us that voice in our head that's talking to keep us in line to keep us in check....

"We all won today. Konichiwa!"

This is how the internet reacted.

A GRIME album beat Radiohead and Bowie. Let that sink for a sec #MercuryPrize 💥

Never thought I'd see another grime album manage to win the #MercuryPrize but I'm overjoyed, Bowie would be chuffed with the result too.

popular
The JOE Friday Pub Quiz: Week 271
Tobey Maguire Spider-Man spotted in No Way Home merchandise
Over 200 kilos of cocaine with Liverpool FC branding seized
Pro Volleyballer spends £590K believing he was dating supermodel Alessandra Ambrosio for 15 years
Ava White, 12, dies after Liverpool stabbing - four boys aged 13 to 15 arrested on suspicion of murder
Woman left devastated when nobody turned up to her Friendsgiving
Boyfriend who stabbed partner 30 times while high on cannabis brownie cleared of murder
You may also like
Music
Skepta announces live dates, his only UK shows as part of SK Level tour
Music
Skepta announces he's going to be a father sharing baby sonogram
Music
The BRIT Awards keep making it harder to give a shit about the BRIT Awards
Music
Everything you need to know about Skepta's 'Konnichiwa'
Entertainment
Will Smith says he once had so much 'rampant sex' it made him 'vomit'
Next Page