END_OF_DOCUMENT_TOKEN_TO_BE_REPLACED

The annual 'Let's see if your parents hate me for trying to shag you on the telly' episode of Love Island aired last night and it was an absolute treat.

Devastatingly, everything ran quite smoothly. Nobody punched anyone, no one refused to shake hands, there were no tears of sadness. It was a goddamn delight. Ugh.

Collectively, we all fantasised about a juicier episode that could have been. Imagine Michael attempting to defend his actions to Amber's parents. Imagine Joe's mother defending his slight obsession with Lucie, describing him as "a full-on guy, but in the best possible way". Imagine Chris' entire family Silly Salmon-ing into the pool. Imagine Tom explaining to Maura's mother what he meant by "all mouth". Alas, it wasn't meant to be. We got the show we deserved.

Here's six things you might have missed during last night's Love Island. 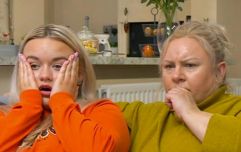 END_OF_DOCUMENT_TOKEN_TO_BE_REPLACED

Perhaps it is a symbol of good luck in the Stoke-on-Trent region of the United Kingdom, whereby the mother of a son must touch the butt tattoo of his lover upon first meeting. As Maura was bidding her mother a heartfelt farewell, Curtis' mum frantically raced over to Maura's backside, touching her tattoo and then pointing at it for a little while afterwards. Maura has a tattoo of a pair of lips on her bottom, something every Irish person is given at birth. Mrs. Curtis' Mum seemed fascinated by this ancient tradition and skipped out of the villa positively giddy at having touched such a sacred relic. She will now have two years good luck and the good weather will continue across the UK and Ireland for the next fortnight as a result. Well done to all involved.

2. Inevitably, Ovie's long arms took the most remarkable group selfie the world has ever seen

Look at the framing on that image. The negative space is perfect, everyone's in shot, no heads have been cut off. It's perfect. It is photographic perfection. Aside from the fact that nobody can see a goddamn thing with the sun in their eyes, but what was Ovie supposed to do? Stand up, reach as high as the burning sun and use his giant hands to momentarily block it out while they took a group selfie? Honestly, yes. That is something that he could have done. But then we wouldn't have seen his adorable little face squinting from the sun like a deer caught in the headlights. Ovie is a tall man. He is 6ft 7in tall and there is no denying that life is easier when he's around. India is a lucky girl. Their couples' selfies are going to be other-worldly. Fair play.

3. For a very brief moment, Greg's aggressive back muscles looked like the side profile a cute little pony

Imagine having back muscles that are so ripped, they resemble a little pony when you lean forward. That is the goal, really. To have a back that looks like a scene from Black Beauty, or failing that, The Animals of Farthing Wood. That's how personal trainers are monitoring their clients these days. BMI measurements are cancelled, with healthcare professionals now using emojis to determine the progress of their clients. Try it yourself. Simply score a place as a contestant on one of next year's two(!) Love Island series and at some point during your stay in the villa, simply lean forward. I will be watching and I will compare your back muscles to an emoji-based animal. No need to thank me. This is merely my job and I happen to take it very seriously.

4. Ellie Belly very subtly referenced an absolute belter of a song from the Dumbo soundtrack

'When I See An Elephant Fly' slaps, that is an undeniable fact. Ellie Belly's time in the Love Island villa hasn't been the easiest, mostly because she's spent her nights lying motionless beside her parents as they attempt to very quietly have ~*relations*~ together on national television. She's happy to have been brought along for a free holiday, but it evidently hasn't been without its challenges. It was comforting to see Ellie Belly soaring to greater heights during Molly-Mae and Tommy's family photo on last night's show. Someone had the good sense to make it seem as though Ellie was flying in the background and it resulted in a) a beautiful family photograph and b) a delicious reference to a belter of a movie. Ellie Belly for the Dumbo re-reboot 2020.

5. Belle's farewell speech to the girls was incredibly touching

Imagine Belle doing a TED Talk and opening with the above line. Sure, it's ballsy, but it would also grab your attention like no other talk has ever done before. That is the mark of a good public speaker right there. Now that Belle is out of the Love Island villa, it's likely that she's going to be trying to cash in on her newfound fame. Motivational speaking is something she should very strongly consider. Regardless of her fiery temper, it's hard to argue that Belle can't get her point across. She's also an interpreter at the top of her game, somehow being able to understand and communicate with Anton over the last couple of weeks with relative ease. Whatever path she chooses, it's clear that we've got a linguist on our hands. We wish her the best.

6. There was a spare set of suitcases waiting outside the villa before Anton and Belle left, but why? (Ghost islanders)

Well now this just doesn't make any sense, does it? Anton and Belle's official (and personalised) Love Island suitcases are clearly on display inside the front door of the villa in the above image. So where are the other two cases from? What we've got here is a conspiracy on our hands. The islanders have been taking two suitcases into the villa, but their exits allude to them having just one case each. We're being lied to. The nation has been taken for fools. If they're lying about something as unimportant as a suitcase, what else is Love Island shielding us from? Is that the real villa? Is Tommy a real human? Is Molly-Mae's iconic bun a clip-on? Is Maura actually very well spoken and polite? CAN CURTIS EVEN DANCE? IS OVIE EVEN TALL? We've been conned. Or maybe they suitcases belong to some ghost islanders. Impossible to say, really.