Yeah, nice one Dec. Good work buddy. We're all proud of you.

As you may or may not know (you definitely do know), Ant McPartlin was forced to suspend all his presenting duties in March after pleading guilty for drink-driving and paying an £86,000 fine.

What would Declan Donnelly do, given the difficult circumstances and the live shows of Britain's Got Talent on the horizon?

He'd only go and bloody present the thing himself.

Look at him, the humble little man with his head bowed, seemingly unable to process the sheer volume of praise Simon Cowell is bestowing on him during Sunday's live final.

In Cowell's words: "I want to say to you, Dec, you have done an outstanding job this week. Seriously, thank you."

Wow. Cheers boss. It almost makes it all worthwhile, doesn't it? Beautiful, beautiful words. You can clearly see David Walliams overwhelmed by the emotion of it all. 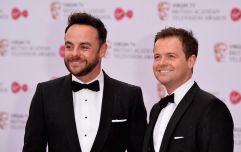 Ant McPartlin will return to host I'm A Celebrity... Get Me Out Of Here in 2019

END_OF_DOCUMENT_TOKEN_TO_BE_REPLACED

To top it all of, Dec the-lucky-so-and-so-oh-what's-he-like even managed to get a weird cuddle from ALESHA from behind. Truly, truly magical.

It was then followed up with a swift and far more wooden encounter with Amanda Holden.

All this during the Britain's Got Talent 2018's grand conclusion which saw Lost Voice Guy Lee Ridley deservedly crowned champion.

Before the show itself, Simon did however admit to wanting both parts of the Geordie equivalent to whatever yin and yang actually is back on his show, saying: "Maybe the pressure was more than I realised. I will support Ant when he comes back.

“He’s not a malicious person, he’s just got himself into a place. But he has owned it and he’s going to deal with it. He’s taken a step back because his health is way more important than a TV show.

The real winner though?

The real winner was love. Or something. I don't know really.