Ali has a lot to say about Stormy Daniels

After a period of inactivity, and a few flops like Grimsby, Sacha Baron Cohen has really come back with a bang in 2018.

His Showtime series Who Is America?, broadcast on Channel 4 in the UK, saw him return to the spoof interview format that made his name - though now with a much more political edge.

The show introduced a host of new characters including NPR reporter Dr. Nira Cain-N'Degeocello, far-right conspiracy theorist Billy Wayne Ruddick Jr., Ph.D., and best of all, Israeli security expert Erran Morad, and sees them going on a journey across Donald Trump's fractured America to try and find a sense of the country. Or in reality, just make fun of a load of gullible interviewees.

Many of the politicians made to look like idiots on the show have blasted Cohen, including Sarah Palin and Dick Cheney.

Now, however, Cohen has resurrected his first great creation Ali G, to send a message to Donald Trump - albeit in text form only. 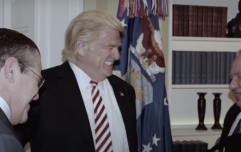 END_OF_DOCUMENT_TOKEN_TO_BE_REPLACED

He ends the message by thanking him for being an inspiration, showing that "u can become President of America without having to give up a life of crime."

Cohen had previously tweeted Trump while teasing the reveal of Who Is America?

A message from your President @realDonaldTrump on Independence Day pic.twitter.com/O2PwZqO0cs

Needless to say, Trump is not a fan.

Glad to see that Sacha Baron Cohen's new movie is not only a dud but not too good at the box office. He is talentless. @Sacha_B_Cohen


popular
CBBC star Archie Lyndhurst has died aged 19
PSG begin talks with Lyon to over sale of Arsenal target Houssem Aouar
Quiz: Which player has scored more goals for Manchester United?
Borat tries to kill COVID with a frying pan in first sequel trailer
QUIZ: Match the quote to the It's Always Sunny in Philadelphia character #2
Beyond The Mat remains the greatest wrestling documentary of all time
Henry Cavill speaks out on Enola Holmes copyright lawsuit