It's been a big few weeks for Thomas...

Actor Ryan Thomas was crowned the winner of Celebrity Big Brother on Monday night, bringing to a close a dramatic series of the show which saw Jermaine Pennant as well as Roxanne Pallett make the headlines.

Clearly stunned by the positive reaction of the audience when he emerged from the house, Thomas said he had "no words whatsoever" following his win.

Thomas was involved in the infamous 'punchgate' incident with actress Roxanne Pallett and endured a rough period in the house after she initially accused him of punching her.

He denied the allegations and said that he had only been playful and that there was absolutely no "malice or anger" in anything he had done.

Pallett later retracted the allegations and apologised for putting someone in that position under strong interviewing from Celebrity Big Brother host Emma Willis. 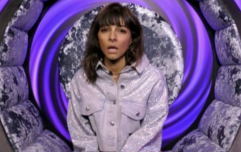 END_OF_DOCUMENT_TOKEN_TO_BE_REPLACED

But Thomas said he's not holding a grudge over the incident and believes that Pallett has suffered enough from the fall-out which has followed her allegations.

He said: "If she wants forgiveness and it makes her feel better I would rather give her that and I think she's been punished enough by the public."

Thomas was then shown the incident for the first time and said that in the aftermath he felt like a "scared little boy".

Former Cheers star Kirstie Alley was the runner-up, with former The Only Way is Essex star Dan Osborne in third place.

popular
Megan Fox reveals graphic sex confession about Machine Gun Kelly
Pubs using 'anti-cocaine' spray clearly don't know how people actually take drugs
The JOE Friday Pub Quiz: Week 265
Addison Rae banned from TikTok
Nike boss Larry Miller confesses to murdering someone when he was 16
Coldplay fans will use pedal bikes to power eco-concerts - while band uses private jets
Salt Bae's restaurant charges £5k tip as part of eye-watering final receipt
You may also like
Entertainment
Emma Willis took no prisoners when interviewing Roxanne Pallett on Monday night
Entertainment
Roxanne Pallett admits that she "got it wrong" over punch accusation
Entertainment
I watched an episode of CBB and learned that God left us a long time ago
Entertainment
Predicting the winner of CBB based solely on their promo photographs
Entertainment
21 things that are going to happen on this year's Celebrity Big Brother
Next Page