Robbie Williams is one of the good guys.

We were reminded of this again on Monday when a picture of the 42-year-old posing alongside an adoring fan circulated on Twitter. 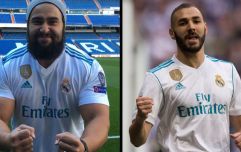 END_OF_DOCUMENT_TOKEN_TO_BE_REPLACED

The star-struck fan, who probably can't even begin to imagine what it must be like to be world-famous and to perform regularly in front of tens of thousands of people, excitedly shared his picture on social media.

'This living legend is a great guy,' tweeted the fan, who is believed to be from Germany, adding that it was a pleasure to meet him.

This living legend is a great guy! Love him. Was a pleasure to meet you @robbiewilliams pic.twitter.com/AsTvp3XFth

Over two decades in the public eye have brought Williams fame and fortune, but pictures like this show that he's still got time for the everyday man on the street.

Good on you, Robbie.