2017 was only a few moments old when it got its first truly great moment.

Robbie Williams was performing live from Central Hall in Westminster, London, to see in 2017 when he decided to head into the crowd during old Auld Lang Syne.

When he got back on stage after shaking hands with members of the audience he was captured on camera giving his hands a quick once over with some antibacterial gel.

Can we all talk about #RobbieWilliams using hand sanitizer after touching his fans hands? pic.twitter.com/Gr8lgjt4bW

The flash of a pained grimace on the 42-year-old's face as he cleansed his mitts was quickly screen-grabbed and soon became the biggest viral moment of 2017.

Since then the popstar has kept a pretty low profile on social media. Until today when he posted this video on his Instagram.

In it Robbie's wife starts by asking him if he has any New Year's resolutions he wants to share with his followers. But before he's able to expand on what they are the former Take That man is interrupted by a conveniently placed New Year's well-wisher. 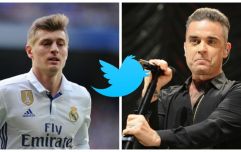 END_OF_DOCUMENT_TOKEN_TO_BE_REPLACED

After exchanging the customary greeting and handshake, Robbie reaches once again for the hand sanitiser before turning to the camera and shuddering. All hilariously executed.

See, he is definitely in on this joke. The world was laughing with Robbie, not at him. Okay.