There is a Predator Christmas special coming next week

Ok, this is a random one

When you think of the traditional animated Christmas specials, the old familiar names come up. The Snowman. How The Grinch Stole Christmas. Charlie Brown.

Santa gets a boyfriend in tearjerking new Christmas ad

END_OF_DOCUMENT_TOKEN_TO_BE_REPLACED

There's a new name to add to that list: The Predator. Yes, really.

The race of murderous aliens have previously stalked Arnold Schwarzenegger, Danny Glover and Adrian Brody, but now it appears they are hunting down Santa and his reindeer.

And if you think this is all a practical joke, here is the trailer to prove that it is a real thing...

The stop-motion short film is clearly a riff on the Rankin-Bass series of festive specials, most notably Rudolph The Red Nosed Reindeer. In the preview clip, reindeer Blitzen gets eviscerated in graphic detail, while elf Sprinkles looks on in horror.

It is all to promote the  Blu-Ray release of this year's The Predator, the latest installment of the franchise. 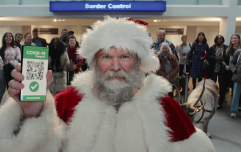 END_OF_DOCUMENT_TOKEN_TO_BE_REPLACED

This is not the first time the Predator has crossed over with other properties, of course. Most famously, there were the Alien Vs Predator comic books and video games, which also spun off into some not very good movies we don't talk about.

In the comics, we've also had various Predators take on Batman, Superman, the Justice League, Judge Dredd, Tarzan, and even Archie from Riverdale.