A very interesting 'dessert', dad jokes about Stormzy and a lairy taxi home. Looks like he had quite the night.

We've already documented the fact Phillip Schofield and his partner in crime Holly Willoughby got 'wasted' at the BRIT Awards last night. 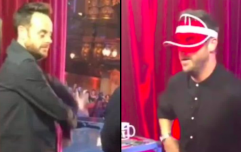 END_OF_DOCUMENT_TOKEN_TO_BE_REPLACED

Holly was seen brushing Phil's hair with a hairbrush during ITV's coverage, with host Jack Whitehall rinsing them for their drunk behaviour. "Look these two are already wasted," he joked. "Behave yourselves."

But if you really want to know what the pair got up to, then the best place to do it is through Phil's Snapchat, which as usual was absolutely hilarious.

im going now but i am bitter and will always be bitter LITTLE MIX WON so here are cute pics of phil and holly pic.twitter.com/peCVvn4nvt

Obviously I could put captions on these, but honestly I think they speak for themself to be honest:

We've all been there after a night out, haven't we? Let's just see how he goes on This Morning later.

The social media response to his snaps were as you'd expect:

Phillip Schofield’s snapchat reactions to Stormzy’s #BRITs2018 performance were the highlight of the entire show for me pic.twitter.com/uuCclcg9cx

Phillip Schofield's Snapchat story is better than the #BRITs