They don't miss a trick.

Up until this point, Perrie Edwards hasn't confirmed whether or not she's in a relationship with Arsenal footballer Alex Oxlade-Chamberlain. 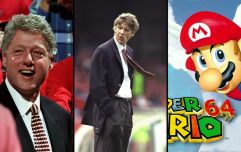 END_OF_DOCUMENT_TOKEN_TO_BE_REPLACED

The pair linked since November but neither of them have confirmed the relationship, even though they were spotted in France together.

It's no surprise that Perrie wants to keep things private after what happened with Zayn.

It hasn't stopped fans from keeping a close eye on her though for the first sign of an official commitment, and now they have it. Perrie followed Alex on Instagram and fans think this is the proof that they're an item.

At that exact moment then Alex followed her as well. It too didn't go unnoticed by fans.

Perrie and Alex are now following each other on Instagram pic.twitter.com/60R8sJM2Xq