Of course you do. It was the show that nobody would shut up about a few years back - and for good reason, in fairness.

As it turns out, some people simply cannot let go of their Breaking Bad obsession.

And those people have been travelling to Albuquerque, New Mexico (where the show was shot) to visit the 'home' of Walter White and throw full pizzas onto the roof of the house.

As some sort of tribute to his life and work, we guess.


If this all sounds rather confusing and strange, you must not remember the iconic scene where Walter arrives home with a pizza, gets angry about something or other (shocking) and lobs a full pizza onto the roof of his home.

It was fairly funny, in fairness. 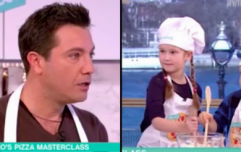 END_OF_DOCUMENT_TOKEN_TO_BE_REPLACED

What is less funny, however, is the fact that fans of Breaking Bad are still doing this.

So much so that the owners of the house are being forced to build a six-foot iron fence around the property to stop people from throwing their dinner up there.

Local news station Kob4 said that the fence had gone up due to "vandalisms, trespassing and general rudeness."

Joanne Quintana lives in the house. Her mum owns it.

She said that most days, she feels like she can't even leave it because something will happen.

"We feel like we can't leave because when we, do something happens and that's ridiculous."

Breaking Bad creator Vince Gilligan has also weighed in on the whole debacle.

"There is nothing original, or funny, or cool about throwing a pizza on this lady's roof.

"It's been done before, you're not the first."