The boys are back this month, but will Gordon mind his language?

Due to premiere at 9 pm on September 27, Gordon, Gino & Fred Go Greek has been announced by ITV via Twitter.

"This time their RV is hitting the beautiful Greek islands..."

END_OF_DOCUMENT_TOKEN_TO_BE_REPLACED

Thanks to their banter and engaging conversations, corrections and arguments, the iconic trio's travel series has become hugely popular. So far they have travelled to America, France and Italy, to name just a few picturesque spots.

This instalment was announced earlier this year by ITV who said: "This time their RV is hitting the beautiful Greek islands and historical city of Athens, for a big fat Greek adventure, together again behind the wheel on an epic odyssey like no other.

"From island hopping on a catamaran, to jet ski racing and shipwreck diving, there will be bromance and bickering in equal measure."

The statement continued to say that Gordon and Gino will be looking to "prove that Greece's culinary credentials are up there with the very best of Europe". 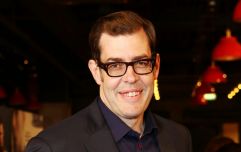 END_OF_DOCUMENT_TOKEN_TO_BE_REPLACED

The latest series will see the trio hit the road (and sea) to explore Athens and neighbouring islands like Crete. Hopefully, they don't bump into Dominic Raab.

Afterwards, the group are set to travel via RV to Santorini, Mykonos and Meteora.

Fans have been quick to share their delight at the announcement.

"Let’s see what swear word my son can pick up this time… last time it was ‘f**k sake’ after @GordonRamsay said it so many times," tweeted one fan.

popular
Groom slammed for going to own wedding to bride, 16, in jeans and t-shirt
Woman reveals cruel reason date dumped her after they had sex for the first time
Kylian Mbappe asked PSG to sell Neymar and replace him with Ousmane Dembele
Confusion as woman appears to fart during viral clip of Depp-Heard trial
The JOE Friday Pub Quiz: Week 295
Topless mum in her undies rescues pet goose from bald eagle in crazy video
Amber Heard told Johnny Depp to 'suck my d*ck' in secretly recorded audio
You may also like
Science
Here's how often you should feed your dog - the results even surprised scientists
Life
McDonald's new UK menu revealed - six items added from today
News
Fan favourite McDonald's item is returning to the menu next week
News
New Nando's drink rule will disrupt fan favourite hack and annoy everyone
News
Food manufacturers changing recipes as UK faces sunflower oil shortage
Next Page