"This is the largest financial crime of the last 25 years..."

Alex Gibney knows his way around a brilliant documentary. 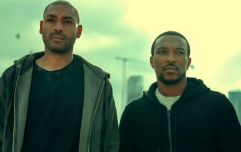 END_OF_DOCUMENT_TOKEN_TO_BE_REPLACED

He has previously directed the likes of The Armstrong Lie, Mea Maxima Culpa: Silence In The House Of God, Steve Jobs: The Man In The Machine, Going Clear: Scientology & The Prison Of Belief.

He was Oscar-nominated for Enron: The Smartest Guys In The Room, and went on to win the Best Documentary Oscar for Taxi To The Dark Side.

So when he jumps on board as an executive producer for a documentary, we sit up and pay attention.

The China Hustle tells the story of the unsettling and eye-opening Wall Street horror story about Chinese companies, the American stock market, and the opportunistic greed behind the biggest heist you've never heard of.

As they say in the trailer, "there are no good guys in this story", as the greed blinds everyone involved to the truth of what is going on behind the scenes.

The documentary will be available to watch online from 30 March 2018.

popular
People want ‘offensive’ Crown Paints advert banned after attracting hundreds of complaints
Incredible case of the only known individual whose parents were two different species
Teacher's sex abuse sentence delayed after she gives birth
Darius Danesh opened up about his health struggles before his tragic death aged 41
Mum gives 5-year-old son at-home drills with backpack to prepare him for school shooting
TikTokers are utterly convinced there is a secret zombie apocalypse going on in China right now
Cyclists may have to get number plates under radical shake-up of road laws
You may also like
Entertainment
Michael B. Jordan leads Jack Ryan spin-off Without Remorse
Entertainment
WATCH: The new Mortal Kombat movie goes all in on the fatalities
Entertainment
Leo DiCaprio's new global warming documentary actually gives us some hope
Film
Will Smith fights digitally de-aged Will Smith in Gemini Man trailer
Film
The trailer for the new Annabelle film is basically The Avengers of The Conjuring movies
Next Page