The first clip from the new Alan Partridge is here, and as awkward as you'd expect

"My mouth is dry"

The first clip from the new Alan Partridge show is here, and it does not disappoint.

This Time With Alan Partridge sees Steve Coogan's greatest creation return to the BBC for the first time since 2003. The new series will see Norwich's finest co-host a One Show-style early-evening show. 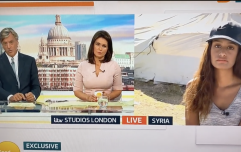 END_OF_DOCUMENT_TOKEN_TO_BE_REPLACED

The clip features Alan freaking out just prior to going live on-air, and gives us our first glimpse of his new co-host  Jennie Gresham (played Susannah Fielding).

Both Tim Key and Felicity Montagu are confirmed to return, as (formerly Sidekick) Simon Denton and Alan’s assistant Lynn respectively.

No air date is yet confirmed, though co-writer Rob Gibbons stated that Alan will return "in a couple of weeks".

Alan Partridge returns in a couple of weeks. Have a trailer: https://t.co/sAjwYDcXT5

END_OF_DOCUMENT_TOKEN_TO_BE_REPLACED

Alan Partridge first appeared in Chris Morris groundbreaking radio news pastiche On The Hour in 1991. He soon got his own spin-off chat show, Knowing Me, Knowing You, and when On The Hour was adapted for television into The Day Today he was the breakout character, getting a TV version of Knowing Me, Knowing You as well. That was followed up by two series of sitcom I'm Alan Partridge.

After a hiatus, Steve Coogan returned to the character with a series of YouTube shorts that became the Sky Atlantic series Mid Morning Matters.

popular
Man with world’s biggest penis says Oscar winner slid into his DMs
'Super recogniser' draws 'accurate' modern Maddie McCann to help police find her
Woman wins millions after suing mum's GP for allowing her to be born
Mum in jail for murder pays tribute to son, 6, killed by his dad and new girlfriend
Bride faints on groom, vomits and gets pooed on during ceremony
Congressman and family pose with guns for Christmas photo days after school shooting
Chilling video shows moment step mum tried to get away with murdering boy, 6
You may also like
Entertainment
This Time with Alan Partridge series two confirmed for April 30
Quiz
QUIZ: Can you complete these classic Alan Partridge quotes?
Television
A statue of Alan Partridge has been erected in Norwich
Entertainment
The Alan Partridge Podcast is coming this week, and you can listen to a preview now
Entertainment
Watching Alan Partridge for the first time ever
Next Page