Name added to This Morning title sequence for heartbreaking reason

It was explained on the show.

On today's episode of This Morning the name 'Charlie' was added to the title sequence for a very important reason.

Back in 2005, Olivia Bazlinton, 14, and Charlotte Thompson, 13, were killed when they stepped out onto a level crossing.

Since her daughter was killed, Tina has been a tireless campaigner about the dangers of level crossings.  She was awarded an MBE in 2014, after managing to have over a thousand of the most dangerous crossings shut down by Network Rail.

And Reg explained to viewers how he has now collected photos from around the world, of people writing his daughter's names. The has now compiled a book from the tributes.

Speaking to Holly Willoughby and Phillip Schofield, he said: "She wanted to travel, she was an incredibly generous girl, and affected by things she saw in the news. 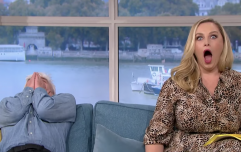 END_OF_DOCUMENT_TOKEN_TO_BE_REPLACED

"I need to keep her in the centre of my life, so I wrote a book before and now this, and it allows her to still be with us."

Holly and Phil gave him a framed photo of the title change.

In response, Reg was overcome with emotion, replying: "Thank you, that's amazing.