Will it be a case of 'Oh well, whatever, never mind'?

'Nirvana baby,' has lost his lawsuit against Nirvana.

END_OF_DOCUMENT_TOKEN_TO_BE_REPLACED

Spencer Elden, now 30, sued 90's grunge band Nirvana for child exploitation, claiming the iconic cover of their 1991 album Nevermind - in which he appears as a four-month-old baby, naked and in a swimming pool - essentially amounted to child pornography.

However, Judge Fernando M. Olguin for the California District Court has thrown out the case on the basis of "with leave to amend," - meaning Elden can refile his claim with changes, if he likes.

It may be a case of "oh well, whatever, never mind" - but if not, Elden has until January 13 to refile his claim.

"Elden's claim that the photograph on the 'Nevermind' album cover is 'child pornography' is, on its face, not serious," argued Nirvana's lawyer Bert H. Deixler.

A post shared by The Revolver Club Magazine (@therevolverclub) 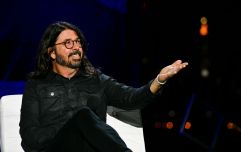 END_OF_DOCUMENT_TOKEN_TO_BE_REPLACED

The motion was filed on behalf of Nirvana band members Dave Grohl and Krist Novoselic, and Courtney Love, executor of Kurt Cobain's estate. Others backing the motion to have the case thrown out of court include cover photographer Kirk Weddle, UMG Recordings who made the record and the Nirvana LLC firm behind the band.

Other defences put forward by the band's legal team included the fact that it's taken too long for Elden to come forward with the child pornography claim.

END_OF_DOCUMENT_TOKEN_TO_BE_REPLACED

In his original motion, Elden claimed the photographed had inflicted "lifelong damages."

When he sued last summer, court documents read: "The permanent harm he has proximately suffered includes but is not limited to extreme and permanent emotional distress with physical manifestations, interference with his normal development and educational progress, lifelong loss of income earning capacity, loss of past and future wages, past and future expenses for medical and psychological treatment, loss of enjoyment of life, and other losses to be described and proven at trial of this matter."

Nirvana pictured around the era the Nevermind album was released

Over the years Elden has recreated the photograph on anniversaries of the album.

In 2015 he told The Guardian: "It is a weird thing ... being part of such a culturally iconic image. But it's always been a positive thing and opened doors for me.

"I might have one of the most famous penises in the music industry, but no one would ever know that to look at me. Sooner or later, I want to create a print of a real-deal re-enactment shot, completely naked. Why not? I think it would be fun."