McCollum and friend Melissa Reid made headlines back in August 2013 when they were caught trying to smuggle 11kg of cocaine from Peru to Madrid.

Convicted drugs smuggler Michaella McCollum has been tipped to take part in Celebrity Big Brother in 2018.

END_OF_DOCUMENT_TOKEN_TO_BE_REPLACED

The 24-year-old spent two years in a South American prison for attempting to smuggle €1.5 million worth of cocaine from Peru to Spain.

She and her Scottish partner-in-crime Melissa Reid became known as the Peru Two and were locked up in 2013 with a sentence of eight years and six months.

McCollum applied to be freed on parole and was released on 31 March 2016, with the prospect of having to remain in Peru for up to six years.

She then returned home two months later, arriving at Dublin airport on 13 August 2016.

END_OF_DOCUMENT_TOKEN_TO_BE_REPLACED

McCollum is rumoured to be taking part in the Channel 5 show which will also be shown on 3e when it starts airing in January.

This season's show differs with seasons past in that the first batch of housemates are all set to be female.

Producers have confirmed that the house will be all female "in a salute to a centenary of women’s suffrage" for the first while. Men will be introduced as the series progresses.

Eye eye! #CBB is coming! It all kicks off on Tuesday 2nd January at 9pm! 👍👍👍 pic.twitter.com/TOHTORYsng 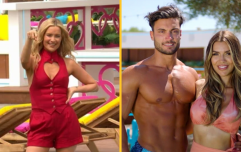 END_OF_DOCUMENT_TOKEN_TO_BE_REPLACED

Celebrity Big Brother will kick off on Tuesday, 2 January at 9pm on Channel 5.

popular
Landlord faces £40k fine after tenant puts swimming pool on roof of flats
Graeme Souness under fire for calling football a ‘man’s game' while sat with Karen Carney
Incredible case of the only known individual whose parents were two different species
Comedian cancelled after ‘getting his penis out on stage’ during Edinburgh Fringe Festival
Man with laughing condition like The Joker accused Joaquin Phoenix of stealing his persona
Man 19 years older than his wife shocked to learn he had met her when she was a baby
JK Rowling told 'you are next' after stabbing of acclaimed author Salman Rushdie
You may also like
News
EastEnders' Samantha Womack reveals breast cancer diagnosis in Olivia Newton-John tribute
News
Emmerdale's Sam Gannon dies aged 31 whilst visiting family in the US
Entertainment
The JOE Friday Pub Quiz: Week 304
Entertainment
Stranger Things star hits back at homophobes
Entertainment
Love Island bosses set to launch middle-aged spin-off for Mums and Dads looking for romance
Next Page